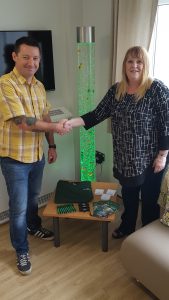 Ade Kevern attended The Bridgeway Sexual Assault Referral Centre today to present staff with items for the Centre purchased from funds raised at an event he hosted earlier this year.

Ade, a firefighter from Whitehaven, hosted a fund raising event – ‘The Big Bash’ which raised £5,000.  The money was split between the Firefighters Charity and The Bridgeway, who provide services to victims of  sexual assault and rape.

With the money, Ade was able to buy two sensory bubble tube lamps for The Bridgeway Centre.  The bubbles, changing colours and floating fish in the tubes help to create a calming and relaxing environment.  Ade also bought a range of merchandise useful for victims and which can be used to help spread the word about the Services provided by The Bridgeway.

Earlier this year Ade decided to waive his anonymity to speak out about his personal experience as a victim and try to encourage others, particularly male victims of sexual abuse and violence to come forward and report it.

Ade said: “I am delighted that through the generosity of family, friends and the wider community we have managed to secure sensory equipment and promotional material for this vital service. The work they carry out cannot be understated, thank you for being there for those in crisis.”

Police and Crime Commissioner Peter McCall said: “ I said at the time when Ade decided to speak about his experience and encourage others victims to come forward,  that it was an incredibly brave thing to do.  And now I am equally in awe of his generosity towards both The Bridgeway and The Fire Fighters’ Charity and would like to express my thanks to him.”

“I would also like to thank Ade for his kind donation, we really appreciate it.  Anything that will help provide a friendly, calm atmosphere such as the bubble lamps, will make a real difference for those who need to attend the Centre.

“The Bridgeway continues to provide a vital service to victims of sexual assault and rape in Cumbria. Between January and June 2017, we have had 122 referrals into The Bridgeway. Of those, 65 examinations have been conducted, with 20 of those done in June alone. This could in part be due to the weather becoming warmer and the lighter nights.

“We recently had a stand at Kendal Calling and we will also be at Cumbria Pride in Carlisle on 16th September, to raise awareness of sexual assaults and the fact it can happen to anyone regardless of age, sex or culture.”

For more information about The Bridgeway, their website is www.thebridgeway.org.uk