As Phase 2 of the countywide CCTV programme is continuing to be rolled out in towns and rural communities across Cumbria, Police and Crime Commissioner, Peter McCall visited Kendal recently to hear about the positive interventions that have already occurred as a result of CCTV installation.

Cumbria and Police and Crime Commissioner, Peter McCall comments: “CCTV cameras are a great additional resource in the fight against crime and anti-social behaviour and helps to focus and target our officers on criminals and their activity.

“As we work through the road map of recovery from the pandemic, the Phase 2 allocation of CCTV cameras are continually being installed.

“People have to feel safe in the area they live and the additional coverage to the existing network of CCTV cameras here in Kendal provides reassurance to local people, that the police are monitoring anti-social behaviour and its consequences.

“As more additional officers are deployed in our local towns and communities as part of Operation Uplift and our work with the local councils to install further CCTV cameras continues, crime and anti-social behaviour will be dealt with quicker and hopefully reduce with criminals knowing that they will be on camera.”

“It provides us with a view over Gooseholme which is a very popular and often busy part of town, particularly in the good weather and in addition, it also gives a good view towards the train station which is one of the main routes for people entering the town.

“I believe this camera will fill the gap in the CCTV jigsaw for coverage of local hotspots in Kendal, providing the Constabulary with a comprehensive ability to capture live images to help fight against crime and anti-social behaviour.”

Peter Wood, Director of Telemachus, comments: “We are currently working with the Town Councils to progress the installation of the remaining cameras to complete this phase of the expansion project.

The additional CCTV coverage this will give will not only provide a greater sense of safety within the local community but is also an invaluable tool to help with crime prevention. ”

In March, the camera on Stramongate bridge was used on two occasions after reports of youths causing a disturbance and meeting up to fight. On both occasions, local officers were directed to the scene by the CCTV operator and the youths were moved on.

In April, a lone female called the Police reporting that she was being followed around the town by a male who was making her feel uncomfortable. CCTV identified the female on Gooseholme and officers were directed to the scene. Both parties were spoken to and the matter satisfactorily dealt with.

In May, the cameras were used to capture images of a building fire, whilst fire and rescue services were on scene. 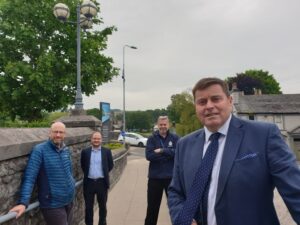