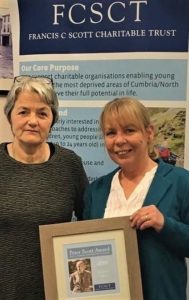 The Triple A charity are celebrating their first year with a Birthday Tea Party as a thank you to all it’s supporters over the last 12 months. They will be reflecting on their many positive stories that have made the project the success it is today, with a theme of ‘So What’? which will look back on the outcomes, achievements, case studies and testaments of people directly involved.

Police and Crime Commissioner, Peter McCall who funds the project said: “I am delighted to be joining Triple A in their celebrations, especially as National Autism Month approaches in April.

“The Triple A project is undertaking some fantastic work looking to break barriers down as autism comes in many different ways.  All to often autism and the behaviour can be misinterpreted and can put the individual at risk.  It is essential that we provide support to the individuals and at the same time raise the profile in the wider community to further understanding.

“Only by us all working together will we help to reduce the risk of autistic individuals being coerced into criminality due to vulnerabilities.”

Helen Storey, Triple A comments: “The Triple A Birthday Tea Party is like a thank you card, we really appreciate everyone’s support, whether it has been in the form of grant funding or an encouraging kind word.

“The difference all the support has made has been fantastic and although we might not get it right for everyone all of the time, the vast majority of people involved with our charity have seen a significant impact on their lives, and this reflects the rich diversity of autism.

“We really appreciate everything that has enabled us to succeed in our first year as an independent charity. The future  looks bright and busy.”

Julie Dodd, Police Constable for the Carlisle Local Focus Team comments: “Cumbria Constabulary have worked in partnership with the Triple A Project since its launch and joint initiatives include the Autism Alert Card and training resources for Police Officers and Police Staff.

“We are delighted to join the staff and volunteers from Triple A to mark their first anniversary as a charity and we wish all involved continued success for the future.”

Karen Quinn, Senior Project Manager for The National Autistic Society comments: “Organisations such as Triple A are essential. They not only promote greater understanding but help give everyone the opportunity to participate fully in their community and ensure that untapped potential is recognised.

“The support we have received from Cumbria Police and the Police and Crime Commissioner has played a pivotal role in our achievements to date. Exciting times ahead and I believe that by working together we can all make a real difference.”