In light of the current Covid-19 guidelines, Police and Crime Commissioner, Peter McCall has postponed face to face public surgeries around the county. Instead, he is welcoming people to write to him to raise any compliments or concerns regarding policing in Cumbria, which would normally be discussed at his public surgeries.

Correspondence received by the Commissioner varies in nature. In order to assist him to respond, the Office of the Police and Crime Commissioner (with your consent) is required to share such correspondence with the Constabulary. This enables them to look into background information relevant to your concern, which then assists the Commissioner to write an informed and personal response to you.

Peter McCall comments: “The correspondence we receive varies from encouraging and complimentary letters from local residents praising the work of officers, to people who wish to log a concern about a particular issue or the level of service they have experienced.

“I do receive many concerns regarding anti-social driving and speeding in our communities. In some instances, with the support of the neighbourhood policing teams and local volunteers, community speed watch groups have been established. Depending on each particular issue raised, the Constabulary are able to refer matters to multi-agency groups for consideration.

“I hope to be holding my public surgeries in the near future, visiting local areas around Cumbria and listening to local people and their views on policing and community safety. However, in the current climate, we have to be responsible, stay safe and try to prevent risk where we can. In the meantime, I would welcome people to take this opportunity and contact me via the Office of the Police and Crime Commissioner:

Formal complaints made regarding an investigation, operational matter or against police officers and police staff conduct remains the statutory responsibility of the Chief Constable to investigate. The Chief Constable’s Professional Standards Department (PSD) are the appropriate body to deal with such complaints, contact details at https://cumbria-pcc.gov.uk/contact/compliments-complaints/ 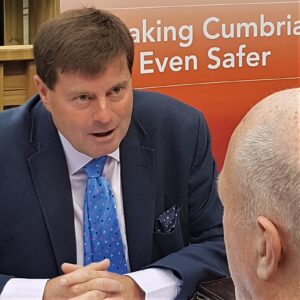