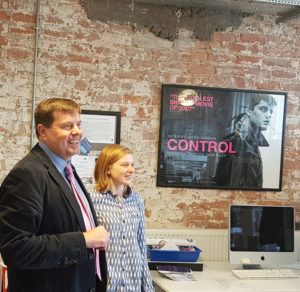 Cumbria’s Police and Crime Commissioner Peter McCall attended Signal Film and Media in Barrow on the 16th October to meet staff who are leading a project that raises awareness of hate crimes with young people in Cumbria.

The project harnesses the unique power of film and media to educate both victims and potential offenders about the underlying causes of hate crime and what it means to be different. Many young people are afraid to be open about their sexuality and lack a safe space where they can think about and discover who they are and how they feel about it.

The series of workshops allow young people aged 14-19 a safe and supported forum to use creative film and media to explore values, identity and gender. The project’s purpose is to give participants a voice, strengthen their sense of self, increase confidence and provide skills development opportunities.

Tackling anti-social behaviour, hate crimes and improving confidence of younger people is part of Peter McCall’s commitment of raising council tax precept. He comments: “The films made during the workshops promote the important message that there is a need for greater tolerance and appreciation of hate crime incidents amongst young people.

“Hate crime will not be tolerated in Cumbria and the Signal Film and Media project is proactive in its approach to tackling anti-social behaviour amongst teenagers.

“Significant improvements have been made in the early identification of hate crime incident reporting and as a result, there have been an increase in the number of reported hate crimes across Cumbria in the last year”.