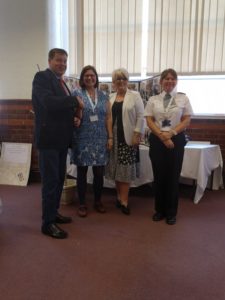 Cumbria’s Police and Crime Commissioner, Peter McCall, hosted a visit from Victims’ Commissioner Baroness Newlove to showcase some of the victims services he has commissioned in the county. The visit took place on Thursday 26 July 2018.

The aim of the visit was for Baroness Newlove to see first-hand how victims of crime are being supported on the ground in Cumbria. She also had the opportunity to meet a number of people who have been victims of crime, to hear their stories and experiences.

The visit took place at Women’s Community Matters premises in Barrow-in-Furness, and included a tour of the Women’s Centre, with an overview of their function and services, as well as sessions from other partners who provide services from victims in the county. This includes specialist services for those who have experienced sexual assault and rape, and those who have been victims of domestic abuse and violence.

There were also representatives from ‘Remedi’, who have been commissioned to deliver what is know as Restorative Justice services – whereby victims are given the chance to meet or communicate with their offenders to explain the real impact of the crime, thus empowering victims by giving them a voice. It also holds offenders to account for what they have done and helps them to take responsibility and make amends.

Cumbria’s Police and Crime Commissioner Peter McCall said: “I am delighted that Baroness Newlove visited Cumbria. It was not only a great opportunity for us to show what we are doing for victims in the county, it is also a chance for victims to share their experience with the Baroness, and have their say. This in turn should provide some valuable feedback for the Baroness and help inform her priorities going forward.

“Finally, I believe that by highlighting what services are available we will encourage more victims to come forward. We want people to have the confidence to report offences against them, safe in the knowledge that they will be listened to, they will be taken seriously, and that there are services and support systems available to help them recover.”

Victims’ Commissioner Baroness Newlove said: “Travelling the country, seeing services and victims first hand, is one of the most important parts of my job.

“When victims come into contact with the criminal justice system it is often at a time of deep personal trauma and upset and in circumstances through no fault of their own. It is therefore doubly important that they are treated with the dignity and respect they deserve. I was pleased to see how victims in Cumbria are supported to rebuild their lives.”

Chief Constable Michelle Skeer said: “Supporting victims of crime is a priority for us at Cumbria Police, with my officers and staff ensuring that people have access to the support services that are available.

“I’d encourage anyone who is a victim of crime to have the confidence to come forward and report incidents to us, we will investigate and also be able to advise how to access valuable specialist support to aid with their recovery at a traumatic time.”

There will also be the opportunity to speak to a victim of hate crime who has undertaken restorative justice.

Service providers in attendance on the day include: