Police and Crime Commissioner (PCC), Peter McCall is responsible for setting the policing element of council tax each year, and today launches the council tax precept consultation, asking the public to support his budget proposals for Cumbria Constabulary 2022-2023.

Each year, Cumbria Constabulary is part funded by government grants and the rest is funded by residents of Cumbria, through what is called the police council tax precept, and together this provides funds for policing and keeping us all safe.

Peter McCall comments: “As the Police and Crime Commissioner, I must ensure that Cumbria Constabulary has the necessary resources to fight crime and anti-social behaviour in order to keep us all safe and maintain low levels of crime.  Unfortunately, Policing like every other aspect of public service and indeed our own household bills, is subject to rising costs and inflation.

“Policing in Cumbria is funded 40% from the policing element of the council tax precept and 60% from government grants. The inescapable reality is that the cost of running Cumbria Constabulary is increasing with inflation and an increased budget of £121m is required to maintain an efficient and effective police service.

“I know that no one wants to pay more tax of any kind, but I also know that people want reassurance that our streets and communities are going to be kept safe. I think most would agree, that Policing is a service we cannot afford to let slip, and that is why I want to hear your views.

“By March 2022, we are on track to have recruited 144 extra officers (99 from Phase One and Two of Operation Uplift, plus 45 from Council Tax) with an additional 64 planned for 2022/2023. This has enabled police officers to be based in 14 more towns across the county.  Recently, we have introduced Community Beat Officers in a pilot scheme in West Cumbria, with plans for more around the county.

“The Force continues to be highly rated as among the best forces in the country by Her Majesty’s Inspectorate of Constabulary and Fire & Rescue Services (HMICFRS) and continue to tackle crime effectively, keeping Cumbria as one of the safest counties in the country. I am sure, like me, you would wish to keep it that way.

“In order to maintain our Police Service for the coming year, I have no choice but to increase the precept, and this would amount to a rise of £7.77 per year or 65p per month for a Band B property (the highest percentage of properties in Cumbria are Band B).  For a Band D property, this equates to a rise of £9.99 a year or 83p a month.

“By asking for your support with these budget proposals, we can maintain the high-quality police service and build long-term resilience to keep us all safe.

“Please could I ask you to take a few moments to complete the following survey and let me know if you support this budget proposal.”

Chief Constable Michelle Skeer, Cumbria Constabulary said: “In recent years our communities have, via their council tax precept, enabled us to maintain and invest in our policing service to help keep people safe.

“Following the recruitment of additional officers, we have increased visibility in local communities to effectively tackle crime and anti-social behaviour. We have also been able to extend resources in the unseen elements of policing, which threaten our communities such as safeguarding and protecting vulnerable people, managing dangerous offenders, drug supply, online fraud and crime, as well as cross-border crime.

“I am proud that Cumbria remains a high-performing police force, which has been graded as GOOD across the board by our inspectorate.

“I hope that the public continue to support Cumbria Constabulary to ensure we can continue to improve our service to local communities, protecting victims, safeguarding vulnerable people, pursuing offenders effectively and tackling organised, cross-border crime to keep Cumbria safe.”

A link to the survey can be found here: https://www.smartsurvey.co.uk/s/L1WQQH/

The survey will close at 5pm on 21 January 2022 and paper copies of this survey can be obtained by ringing 01768 217734 or emailing commissioner@cumbria-pcc.gov.uk 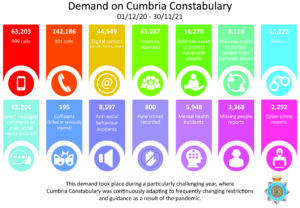 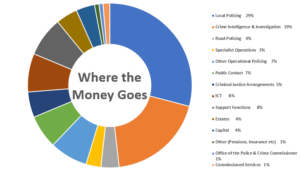