ICVs are members of the public who make unannounced visits to Police Custody units every week to check on the welfare and well-being of the people who are detained, to ensure that their rights are observed and that they are looked after properly. The ICVs visit in pairs to guarantee that all evaluations are fair and precise.

In 2018/19 the ICVs conducted 192 visits to police stations across Barrow, Kendal, Carlisle and Workington. Over this period 8,903 people were detained in police custody in Cumbria.

The Commissioner and volunteers spent their visit inspecting the cells, charge areas and detention rooms whilst discussing the importance of the ICVs.

Peter McCall said: “The Independent Custody Visitors are doing a fantastic job and they really need to be commended for their dedication to making sure that those in police custody are treated fairly and that their mental, physical and emotional wellbeing is taken care of.

“The volunteers are crucial as they inform the Constabulary and I of the standards of each custody area across the county through their official, independent reports.

“I am really pleased that we have been able to highlight the incredible work and dedication of the ICVs ahead of National Volunteers Week and I would like to thank them all for their dedication in this vital role.”

An Independent Custody Visitor said: “It’s so important that our community can be confident that people who are taken into custody are treated properly and their rights are protected, especially if they have difficulties, or are vulnerable in any way.

“Since I became a visitor, I have been well supported by the Office of the Police and Crime Commissioner, and feel that the role I have taken on is valuable.” 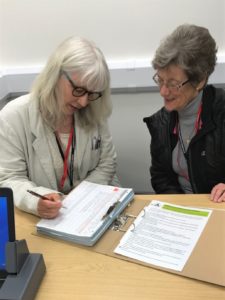