Commissioner Supporting a ‘Be Safe, Be Aware’ Awareness Event, Educating Young People to be More Aware of their Potential Vulnerability and Recognise Crime

Cumbria’s Police and Crime Commissioner, Peter McCall, will be opening the ‘Be Safe, Be Aware’ Symposium, in collaboration with NHS England and Newton Rigg College, Penrith on Thursday 2nd May 10 – 3pm. While Cumbria is one of the safest places to live, our ‘Be Safe, Be Aware’ Symposium is all about making young people aware of the potential dangers and issues in the county and how to spot the signs.

Modern Slavery is closer than we think, with offenders targeting, recruiting and exploiting a wide range of vulnerable adults and children within the county. In the past 12 months there have been 10 victims of Human Trafficking in Cumbria, some of whom have been linked with County Lines. There have also been investigations into victims of forced labour on fishing trawlers, nail bars and victims who have been forced into sex work in our communities. In 2018 there was a 36% increase in Modern Slavery Victims being referred into the National Referral Mechanism across the UK compared to 2017, with the number of minors being referred increasing by 48% compared with the previous year.

During the ‘Be Safe, Be Aware’ symposium, Cumbria Constabulary will be using real life examples to highlight vulnerabilities that exist in rural areas, including presentations on Modern Slavery, Sexual Assault, Child Sexual Exploitation and County Lines, as well as breakout sessions and training from Get Safe on Line. Students will also have the opportunity to complete a Modern Slavery walkthrough: an exhibition featuring three different ‘virtual’ experiences to increase awareness of the pupils about potential modern slavery occurring in Cumbria. Information will be given on how to report anything suspicious and where young people, friends or family need to go for support and help.

Services from The Bridgeway will feature throughout the event and market place providers will be available for assistance, support and questions which may arise as a result of the presentations.  Crimestoppers, Birchall Trust, The Bridgeway, Unity, Safety Net, Victim Support, Police Recruitment and the Youth Commission with Leaders Unlocked will be showcasing at the event.

Peter McCall, Cumbria’s Police and Crime Commissioner comments: “Events such as this ‘Be Safe, Be Aware’ are vitally important, especially as all too often offenders prey on young people who are unaware, often too trusting, vulnerable and at risk to  potential ‘unseen’ dangers that unbeknown to them, are happening here in Cumbria.

“Crime is becoming more complex as we see more emerging ‘unseen’ threats such as modern day slavery, human trafficking and the effects of organised crime groups from outside the county. We are aware and continue to be more alert to counter these new threats effectively and as a result, additional resources have been allocated.

“Even though Cumbria is one of the safest counties in the country, we must not become complacent and this is why we need to inform, direct and educate young people how to report suspicious activity, to protect themselves and also to watch out for their friends and how to access support services across the county if needed.”

Jo Tate, Employability Team Leader comments: “At Newton Rigg College part of Askham Bryan College, we are very keen for our students to be informed and educated about issues within their local community so that they are able to access support for themselves and their family and friends as appropriate. Many of the students who are attending the conference live in rural areas which puts them at an increased risk to some crimes due to their isolation, so this event will help them to be aware of the potential risks.

“Some of the students on our Uniformed Public Services course will be able to use the information gained when they apply to the police, as they will be able to talk about local crime in an informed way. Working in partnership with the Office of the Police and Crime Commissioner and Cumbria Constabulary is invaluable.”

Detective Chief Superintendent Dean Holden said:  “It is important that everybody is aware of the signs that could indicate offences such as modern slavery and county lines drugs crimes are taking place. But as the young and vulnerable are often victims of these types of crimes, it is vital they know the warning signs and dangers.

“County lines, child sexual exploitation and modern slavery are growing issues for policing across the UK – and Cumbria is no exception. Our officers work daily in partnership with other police forces and agencies to tackle these issues, protect people and keep people safe.

“We also need the public to act as our eyes and ears to help us safeguard vulnerable people and bring offenders to justice. Events such as this are important in driving home the fact these offences can happen anywhere – and people should be aware of the suspicious signs and the support out there.”

Charlotte Winter, NHS England comments: “Prevention is becoming increasingly challenging and we all have a responsibility to help stop these crimes from happening. Any child or young person, male or female can be at risk, and this symposium will provide invaluable education directly to young people to help them to stay safe and to know where to turn to if they need to ask for help to minimize any exposure to harm.” 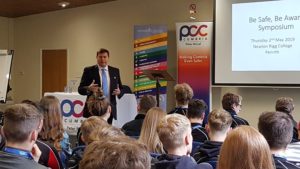