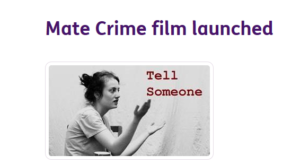 As part of Hate Crime week, Cumbria’s Police and Crime Commissioner Peter McCall and Cumbria Constabulary are supporting the launch of ‘Tell Someone’, a film produced by Carlisle Mencap focusing on Mate Crime on Wednesday 6 February 11am at Harraby Community Theatre, Carlisle.

Mate crime is when people with learning disabilities are ‘befriended’ by predatory criminals who ‘make friends’ with a person and then go on to abuse and/or exploit them instead, often taking over their homes and lives, known as ‘cuckooing’.

Peter McCall comments: “I have to confess that I think anyone who preys on vulnerable people to exploit their disability is particularly despicable and we must do all we can to protect those who are vulnerable to this appalling crime.

“Victims often feel threatened that things will be worse if they ‘tell’ and this is why the film is so important. Encouraging vulnerable people to ‘Tell Someone’ is a vital, clear and essential message. With greater understanding, people will feel empowered to open up to support workers and authorities and report the crime.

“Mate Crime is one of the cruelest hate crimes and often goes unreported. I hope this new film will provide a useful tool for people with learning disabilities to improve their understanding of Mate Crime, how to avoid being caught up in it and where to go for help and support.  It also serves as a reminder to us all that we have a responsibility to look out for those around us and anyone can report this type of abuse if they encounter it on behalf of a vulnerable person.

“All year round, and especially during hate crime week, it is important to raise awareness of Mate Crime. It can happen to anyone but children and adults with learning difficulties are especially vulnerable. It is seen as the ‘hidden’ hate crime and this needs to change, together we can bring perpetrators to justice and protect the most vulnerable in our communities.”

Detective Chief Inspector Craig Smith said: “Cuckooing or Mate Crime targets some of the most vulnerable individuals within our community and has devastating effects. This film is important to raise awareness in this area and to highlight the issues. If you are affected by the issue of cuckooing either directly or if the victim is someone you know, I would urge you to get in touch with us or tell someone who you know and trust.

“It’s important that our community is also aware of the warning signs around this type of crime to support those who might not understand the intentions of the perpetrators.”

Sheila Gregory, CEO at Carlisle Mencap, said: “Vulnerable people are often lonely and very susceptible to mate crime. Many don’t understand the dangers and regard the perpetrators as their friends. The victims can suffer very real harm in these situations.

“The Independence Studio members are ideal to make a film like this because they are disabled themselves and are therefore able to produce a product that is accessible to their peers.”

If you suspect someone is a victim of Mate Crime the police must be informed, regardless of whether the victim is in agreement, and call 101 or anonymously call Crimestoppers on 0800 555 111 or email via their online form.

The film can be viewed at https://youtu.be/D1VnZqvxBrA