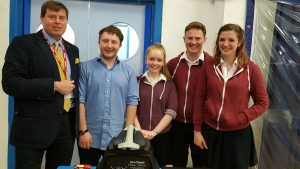 Cumbria’s Police and Crime Commissioner, Peter McCall, is delighted to announce that he is once again funding a national theatre production company to raise awareness of child sexual exploitation (CSE)

Last year, the powerful play ‘Chelsea’s Choice’, produced by not-for-profit organisation AlterEgo Creative Solutions, was shown in schools across the county and had an extremely positive effect.  More than 6,500 students saw the play, and of those surveyed, over 99% said they had a far better understanding of the issues involved then they had before watching the play, with 98% saying that they now understood that boys, as well as girls, can be victims of grooming and sexual exploitation too.

“I’m really pleased to support this production as tackling online sex crime and supporting our young people are two of the high priority objectives in our Police and Crime Plan.  Therefore, any initiative that helps us to keep our youngsters safe is to be welcomed.

“I know that last year’s programme of performances proved very worthwhile, and I am looking forward to seeing one of the productions this week. The statistics show quite clearly how impactful the play was on those that saw it, resulting in far better informed youngsters, who will hopefully now be less likely to become victims.”

“I am delighted that this play will once again be performed to hundreds of young people across Cumbria. It is a powerful piece of work that effectively raises awareness on a very important issue and encourages young people to recognise the signs of grooming and exploitation.

“CSE can take many forms, for example it could be a young person having sex in return for attention, gifts, alcohol or cigarettes. Although the young person may not realise they are being exploited at the time, this can cause a lot of damage to their physical, emotional and psychological health as they come to realise that they have been a victim.

“Last month we worked with students from Carlisle College who conducted a takeover of our new Snapchat account. They put together an impactive Snapchat story regarding the issue of CSE which was well received by followers of the Constabulary’s social media accounts.

“Many people think that because Cumbria has a low crime rate that CSE does not happen here. However CSE can happen to any child, anywhere, which is why it is so important that people are aware of the issue.”

The overarching objectives of the project are to:

Photograph is of Mr McCall with the cast of Chelsea’s Choice.