Cumbria’s Police and Crime Commissioner, Peter McCall, has today given evidence to the Public Accounts Committee on serious and organised crime.

The Commissioner attended the committee alongside Merseyside Chief Constable Andy Cooke. The Commissioner was able to articulate the impact of serious and organised crime in rural communities and how the Constabulary work together with regional and national colleagues to tackle this type of crime.

Peter McCall, Cumbria’s Police and Crime Commissioner, said: “I was pleased to be able to take the opportunity to voice concerns from rural counties like ours, too often these issues are focused on the big Metropolitan areas and Cumbria is forgotten, I will take any opportunity to get across to MPs the importance of local policing and how it is essential that this is and must be the bedrock of policing.

“Importantly, I was able to raise again over the reality that policing has seen a significant reduction in funding and the obvious consequences this is having on policing nationally but also for a small force such as Cumbria.

“Crime is changing and it is essential that we give our Chief Constables the resources to effectively keep our communities safe.

“We are seeing a greater demand of resources in what we call unseen policing such as Child Sexual Exploitation, modern day slavery, as well as the more traditional drugs issues that bring misery to our communities.

“Serious and organised crime is the responsibility of many agencies not just the police and we do need to be better coordinated to deal with this.

“We have to focus on prevention, this is not just the job of the police and I welcome the development of a legal duty to support a multi-agency approach to preventing and tackling serious violence and crime.

“More work needs to be done across partner agencies to ensure that we have a joined up approach to preventing crime with our partners in health, education and employers.

“I was able to give the committee a clear message from Cumbria – that we all have a role to play in tackling drugs and funding is a significant issue for us every bit as much as our large forces elsewhere.” 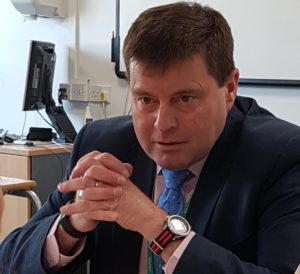