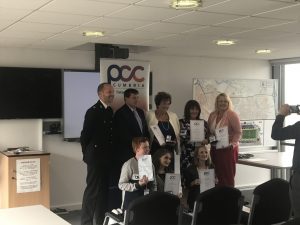 Local people,  young volunteers and professional teams were among those who received PCC Community Awards (North Cumbria) on Thursday 13 July.

Winners and their guests were invited to Durranhill Police Station where they were presented with their awards by Cumbria’s Police and Crime Commissioner Peter McCall.

Peter McCall said: “I launched my Community Awards earlier this year as I wanted to be able to formally recognise the outstanding work carried out by people within Cumbria who help to keep their communities safe, in either a voluntary or professional capacity.  People who go that extra mile to deliver services to the public, preventing crime, supporting vulnerable people and victims or deliver an outstanding service.

“I remain convinced that we all need to work together to keep Cumbria safe.  My ethos is ‘we, not they’, and I am extremely grateful to those who epitomise this vision, and it is my pleasure to formally recognise them and say a very big ‘thank you’.”

Amongst the winners were the members of the Young Perspective Board, who won the Outstanding Young Citizen Award. The group were nominated in recognition for their hard work to help ensure the voice of children and young people is listened to and taken seriously.  In doing so, they play an active role in the design and development of services provided for them, thus better meeting their needs.

Kerry aged 18 said: “I feel very honoured and happy not just myself but for everyone else in the Young Perspective Board.”