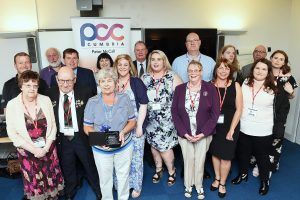 The winners and supporters after being presented with their awards from the Police and Crime Commissioner Peter McCall at the Community Awards Ceremony. pic Mike McKenzie

Local people,  volunteers and professional teams were among those who received PCC Community Awards (West Cumbria) on Monday 10 July.

Winners and their guests were invited to Workington Police Station where they were presented with their awards by Cumbria’s Police and Crime Commissioner Peter McCall.

Peter McCall said: “I launched my Community Awards earlier this year as I wanted to be able to formally recognise the outstanding work carried out by people within Cumbria who help to keep their communities safe, in either a voluntary or professional capacity.  People who go that extra mile to deliver services to the public, preventing crime, supporting vulnerable people and victims or deliver an outstanding service.

“I remain convinced that we all need to work together to keep Cumbria safe.  My ethos is ‘we, not they’, and I am extremely grateful to those who epitomise this vision, and it is my pleasure to formally recognise them and say a very big ‘thank you’.”

Amongst the winners were Roy and Marian Muir from Whitehaven, who won the category of Outstanding Volunteers.  Roy and Marian volunteer for the project Nightstop, and provide emergency overnight accommodation for youngsters in crisis.

Speaking of their award Roy and Marian Muir said:  “We both really enjoy hosting for Nightstop and have met some incredible young people, we find it so rewarding as it gives the young people a second chance to enjoy life and better themselves in their future endeavours.”

Other award winners in west Cumbria were: