Peter McCall, Cumbria’s Police and Crime Commissioner is supporting the ‘You Decide’ workshops in local schools through the Community Fund, to raise awareness and educate young people to recognise the signs of unhealthy relationships and understand the reasons why people get involved in sexting.

The ‘You Decide’ sexting and healthy relationships workshops will help to prevent young people becoming victims of potential grooming, child sexual exploitation and sexual abuse as a consequence of sexting and sharing images on-line. They also highlight appropriate support for children and young people who have become victims of sexual crime through sexting.

Peter McCall, Cumbria’s Police and Crime Commissioner comments: “Helping children be more aware about the risks of sexting and sharing images is essential, and we all have a role to play in keeping ourselves and young people safe online.

“Sadly young people often send a sexting message in order to fit in, because they think that everyone is doing it, or they are done as a joke, a way of getting attention, or as flirting with someone on-line.

“The workshops encourage young people to think about how they control their own positive decisions, rather than be dragged into doing something they will later regret, just to ‘fit in’.

“Creating or sharing explicit images of a child is illegal, even if the person doing it is a child.”

“We are delighted that Peter McCall, the Police and Crime Commissioner for Cumbria has visited us today in school. Today’s workshop carries on the work we do  to educate and raise awareness of the dangers that our students may face and the laws surrounding this type of behaviour.”

“It’s crucial that we all do what we can to remind young people of the dangers of sexting.

“With young people and vulnerable adults having easier access to the internet than ever before, the sexting culture is increasingly becoming a problem.

“I would like to remind anyone considering sending such content that once you have sent an image, you have forever lost control of it, and it could be used to bully, harass, or even locate you. Our advice is if you would not willingly show your parents the photo then do not send it.

“These workshops will hopefully provide young people with the facts so they can make appropriate and informed decisions.” 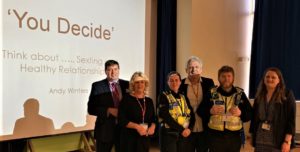