Five additional problem solving proactive officers in Carlisle that were introduced following a rise in council tax have resulted in more than 100 additional arrests, more than 140 person and house searches completed and submitted almost 500 additional pieces of intelligence.

Cumbria’s Police and Crime Commissioner, Peter McCall, introduced the £12 a year rise in council tax early 2018 after seeking the views of the Chief Constable, members of the public and the Police and Crime Panel.   The additional funding has been in now place just over 12 months with a real difference being made in the local community.

Highlights for these officers have been working to tackle exploitative County Lines  organised crime in the city, including the safeguarding of a teenage victim and the detection and arrest of a prolific rural burglary target who had also been wanted for violent offences – he is now back in prison on recall.

The officers were also responsible for the arrest of a man – Liam Bailey – who was sentenced in September to 40 months in prison after he was identified as being involved in drug supply and subsequently found in possession of tens of thousands of pounds worth of cocaine and cash.

“Thanks go to the Local Focus tasking process, they are right where the public, the police and our partners need them to be.

“They respond to intelligence – often generated by themselves through their own work, interview their own offenders and tackle complex issues which significantly lowers demand on response colleagues.

“The officers have worked exceptionally and Carlisle is a safer place for their on-going work.”

In Eden, there were three Problem-Solving Proactive Officers introduced as a result of the increase to council tax precept.

These officers have been at the heart of proactive work in the Eden area including tackling antisocial driving and working with collision reduction officers on road safety operations which resulted in more than 40 drivers dealt with for offences on a single operation  – including five offences for one driver including speeding and drug driving.

The Eden Proactive Officers are all trained in use of the laser to detect speeding offence, drug wipes and are also Field Impairment Test trained. Since October 2018 they have arrested 21 people for drink/drug driving – one individual received a five-year ban.

The officers have also been heavily involved in crime prevention in rural communities including high-visibility patrols, working with officers from other police forces to combat cross-border criminals and delivering crime prevention advice to vulnerable people who could be targeted by thieves. The officers were recently responsible for foiling a quad bike theft – recovering the bike before the owner had even noticed it had been stolen.

They have also been involved in drugs operations which have resulted in drugs offences being detected and investigated.

Eden NPT Inspector Jo Walker said: “These officers are an invaluable asset to the team here in Eden and to the communities of Eden.

“These three officers are making a real difference – both on the streets and behind the scenes to help keep Eden safe.

“The examples given above barely scratch the surface of the impact these officers have had and, as Inspector for Eden, they have been integral to enabling many to deliver neighbourhood and community policing in the district.”

Cumbria’s Police and Crime Commissioner, Peter McCall, said: “The extra officers have done some outstanding work in North Cumbria.  I am very conscious that extra council tax is not popular but I hope that people will feel that the real impact these additional officers have made, is worth it to keep our streets safe.

“We asked you what you wanted to see and you very clearly told us that you want to see officers on your street fighting crime.  Hopefully, the results one year in will help you understand what the increase in your council tax has been paying for and the difference it is making in fighting crime and keeping you safe.  Whilst, in North Cumbria the pro-active teams equate to eight officers, they have made a real difference.

“We all have an important role in tackling crime, the police need information and it is only by passing information and reporting, that the police can build up a picture of what is causing you issues.  By us all working together we can make our communities safe and stop criminal behaviour.

“With the Government’s promise of another extra 20,000 police officers across the UK, we welcome that in the first tranche of recruitment that we will receive funding to recruit 51 additional officers. These additional police officers will be dedicated to our frontline and will be out in our communities fighting crime.  The Chief Constable and her team will be working with us to determine how best they can be deployed, to have the best effect for our communities.” 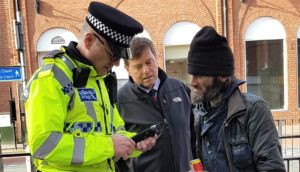