More than 200 additional arrests have been made in West Cumbria, as a result of the extra police officers that were introduced following the rise in council tax.

Cumbria’s Police and Crime Commissioner, Peter McCall, introduced the £12 a year rise in council tax early 2018 after seeking the views of the Chief Constable, members of the public and the Police and Crime Panel.   The additional funding has been in now place just over 12 months with a real difference being made in the local community.

The figures and results speak for themselves in terms of what the extra ten officers working pro-actively have helped local teams in Allerdale and Copeland do in the last year.

In West Cumbria, the proactive teams have made 217 arrests, carried out 311 stop-searches, dealt with more than 120 traffic offence reports and conducted 43 premises search warrants. This included arrests on suspicion of driving over the limit of alcohol or drugs, leading to motorists being handed disqualifications by the courts.

Dozens of the arrests were on suspicion of drugs offences. Weapons-related arrests were also made and vehicles seized following stop checks.

Noteworthy operations and results include:

Cumbria’s Police and Crime Commissioner, Peter McCall, said: “The extra officers have done some outstanding work in their local areas.  I am very conscious that extra council tax is not popular but I hope that people will feel that the real impact these additional officers have made, is worth it to keep our streets safe.

“We asked you what you wanted to see and you very clearly told us that you want to see officers on your street fighting crime.  Hopefully, the results one year in will help you understand what the increase in your council tax has been paying for and the difference it is making in fighting crime and keeping you safe.  Whilst, in West Cumbria the pro-active teams equate to ten officers, they have made a real difference.

“We all have an important role in tackling crime, the police need information and it is only by passing information and reporting, that the police can build up a picture of what is causing you issues.  By us all working together we can make our communities safe and stop criminal behaviour.

“With the Government’s promise of another extra 20,000 police officers across the UK, our numbers will once again increase in the near future.  I can assure residents that I am fighting hard to ensure that in Cumbria we get our fair share of these extra officers and that we get them on the frontline as soon as we can, indeed here in the county we’re ahead of the game and we’ve already started to recruit.”

Inspector Rachel Gale, who leads the Allerdale Local Focus team, said: “These results show how busy and hard-working the teams have been over the last 12 months.

“These officers have been out-and-about, carrying out visible duties, solving and deterring crime and reassuring the public.

“The results all reflect our response to community and constabulary priorities.”

Inspector Richard Smillie, who leads the Copeland Local Focus team, said: “These extra officers have been a real asset to the teams in west Cumbria.

“Most of their work relates to issues associated with priorities that we have set at our meetings with partners.

“I am confident a lot of this work would not have happened in the absence of the additional officers.” 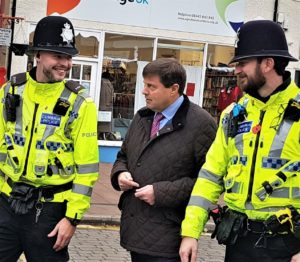