County Lines – public can help prevent exploitation of the vulnerable 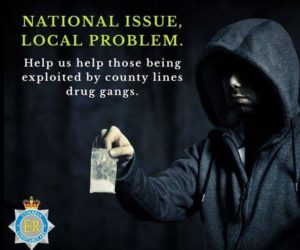 Cumbria Police is working to improve the public’s awareness of ‘County Lines’ and what to do if they suspect a vulnerable child or adult is being exploited by gangs.

County Lines is a phrase which does not refer simply to the transportation and dealing of drugs across counties but specifically the exploitation of vulnerable children and adults by gangs based in cities to move the drugs and money around the country.

The aim of the campaign is to make the general public better equipped to spot the signs of people being exploited by criminal drugs gangs and to educate the public on how they can report suspicions and concerns.

“Our officers are working daily in partnership with other regional police forces and national agencies to tackle the issue of criminal gangs using vulnerable children and adults to move drugs and money into and out of Cumbria.

“But we need the public to act as our eyes and ears to help us safe-guard vulnerable people who are being exploited and to help us bring down those who seek to peddle drugs in our communities.”

There are some simple signs which could indicate exploitation by criminal gangs which we are asking for the public to look out for:

Det Ch Supt Holden said: “We would urge taxi drivers to be particularly vigilant to signs of people being exploited by drugs gangs.

“Signs for drivers to look out for is a child, sometimes as young as 12, travelling alone, perhaps over long distances and paying in cash. They might be obviously unfamiliar with the area and may speak with an accent from elsewhere in the country.

“They may also be travelling during a time when they should be at school or particularly unusual times such as early in the morning or late at night.

“Our officers are on the lookout every day for such warning signs but the public can also be an enormous assistance in preventing the exploitation of the most vulnerable members of our society.”
Cumbria’s Police and Crime Commissioner Peter McCall said: “It is really important that we deal effectively with the organised criminals who run County Lines across the country and including to an extent here in Cumbria.

“The people who deal in this activity are totally unscrupulous and exploit vulnerable people including young children in their crimes.

“Together with the Constabulary I am determined that we must make it very difficult for County Lines to operate in our county but – the Police need your help to bring these criminals to justice, so please do get in touch if you have any suspicions – your call can help save someone from falling prey to these dangerous criminal gangs.”

If you have any information about someone you suspect of involvement in County Lines you can call Cumbria Police on 101. Always call 999 in an emergency and/or where a crime is in progress

Or you can contact Crimestoppers anonymously on 0800 555 111 or online here crimestoppers-uk.org/give-information