Cumbria PCC receives over £300,000 to help reduce crime in Allerdale

Cumbria’s Police and Crime Commissioner, Peter McCall, received £311,358 from the Home Office’s Safer Streets Fund following a successful bid. The Fund is aimed to help reduce neighbourhood crime, increase safety of residents and reduce the demand of Police. The St Michael’s ward in Allerdale, which is a predominately residential area but will also cover St. Michael’s Nursery and Infant School and Vulcan Park, will be the recipient of the fund. The PCC will work alongside Cumbria Constabulary, Allerdale Local Focus Hub, the West Cumbria Community Safety Partnership, Allerdale Borough Council and Cumbria County Council to implement the changes and upgrades.

The £311,358 will be spent on crime prevention measures including Safer Homes Packs to protect 1,300 homes. The packs will be delivered by two Safer Street Officers, based in the Allerdale Local Focus Hub, along with advice to residents on how to improve home security, with the assistance of PCSOs. The street lighting will also be updated in areas including Lonsdale Street, Clay Street, Milburn Street, Harcourt Street, Fletcher Street, York Street and Gladstone Street to deter opportunistic criminals. The Fund will also provide target hardening invention to 150 homes across the area focusing on households that have previous been targeted by criminals and households identified with vulnerabilities that will benefit from additional security measures.

A public realm lighting scheme will be introduced in Vulcan Park, an area that has been highlighted as a repeat location for anti-social behaviour. The scheme will aim to reduce any illegal behaviour due to lack of privacy and enhance patrolling options for Police. CCTV will also be set up at the St. Michael’s Nursery and Infant School to increase surveillance of the surrounding areas to decrease opportunistic criminal activities and anti-social behaviour.

Cumbria’s Police and Crime Commissioner, Peter McCall, said: “This funding will really boost the St. Michael’s area in Allerdale and will create a safer, more comfortable neighbourhood for all the residents.

“With the provision of Safer Homes Packs, improved street lighting and CCTV, I hope the residents will feel safer in their community and notice a reduction in anti-social behaviour.

“The first round of Safer Streets funding focused on the Salthouse Road area of Barrow and there have been significant, visible improvements to the security of the area and I know we will see the same benefits in Allerdale.

Inspector for Cumbria Constabulary, Rachel Gale, said: “We welcome the announcement that funding will be provided to support our efforts to prevent crime and further support the community in the St Michael’s area.

“Crime has a lasting impact on victims and the communities they occur in. By working together effectively we will be able to prevent crime before it happens, leading to less victims and a better quality of life for local residents.”

“We look forward to working with the Police and Crime Commissioner and our partners to build on the previous success at Salthouse Road in Barrow.

“This additional funding will enable targeted lighting improvements to address anti-social behaviour and contribute to making our communities safer.”

MP for Workington, Mark Jenkinson, said “I welcome this investment from the Safer Streets fund into Workington. I previously lived in St Michael’s ward so I know firsthand the difference these improvements will make.

“This investment in CCTV, improved lighting schemes, support staff and continued work with partners to tackle criminal activity is hugely welcome and I look forward to seeing the positive effect that this investment has in Workington.”

Manager of the Allerdale Local Focus Hub, Emma Thompson, said: “The funding secured will be hugely beneficial to the work that we are doing to support residents in the St Michael’s area.

“The additional security measures which are set to be introduced, such as improved street lighting and CCTV, will assist in preventing crime and making the area an even safer place to live.”

Deputy Leader of Allerdale Borough Council and Chair of the West Cumbria Community Safety Partnership, Marion Fitzgerald, said: “On behalf of the West Cumbria Community Safety Partnership, I would like to express my thanks to the team members at the Police and Crime Commissioner’s Office who coordinated the successful bid for Safer Streets funding and worked so hard to put together the case for Workington.

“Looking at the successful roll out of community safety measures in Barrow where funding was awarded last year, I am confident that the planned programme of work will make a huge difference to residents in St Michaels.

“Everyone deserves to feel safe and secure at home and in the area close to where they live.  I am sure that this project will result in many positive changes in St Michaels.

“I can’t wait to get started.” 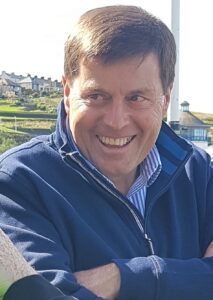