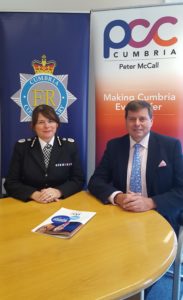 Cumbria’s Police and Crime Commissioner has today received at his Public Accountability Conference (PAC) an update from the Chief Constable about the increase levels of reported crime in the county.

Overall, crime has increased by 15.9% over the last 12 months to 31 May 2018 this is in line with the national figures.  In Cumbria, this equates to 4,091 more crimes being reported and classified appropriately.  There are two categories that have seen significant increases:

For the same period anti-social behaviour has dropped by 13%.

“The statistics show that the number of crimes recorded in Cumbria for the 12 months ending May 2018, have increased by 15.9%, which is in line with the national trend.

“The two main contributory factors to the increase are, firstly, the continued increase in confidence from members of the public to report what has happened and, secondly, changes to the way some offences are now classified and recorded. We have undertaken significant training to our officers and staff so that they understand recent crime recording changes and to ensure this is accurate – this has had an impact and has resulted in some of the increases mentioned.

“One area where we have seen an increase is violence against the person. This crime type covers a wide range of offences, including Violence without injury – which has seen a 45% increase which shows people have the confidence to report early – before violence has taken place. Domestic abuse accounts for almost a third of all violence against the person offences. The statistics are certainly impacted by greater compliance by officers with crime recording practices, something which has been recognised nationally by the Office of National Statistics, which can give reassurance that Cumbria remains a safe place.

“There has been a slight increase in domestic abuse offences, which is encouraging that victims have the confidence to report to us, a great deal of work continues to be undertaken by the Constabulary to encourage victims of domestic abuse to report what is happening to them. It is important to note that the Constabulary has a high conviction rate for these type of offences that reach court. All victims can be assured of a thorough investigation and will receive the support they require to safeguard them.

“There is no significant increase in theft offences, and the small increase in burglary offences recorded is reflected across the country. We will continue to work closely with our communities in order to prevent such offences. Robbery offences remain low and is well below the national average increase of 23%.

“Reports of Rape and other sexual offences continue to rise, again this is in line with the national trend. Almost half of rape offences recorded in Cumbria are non-recent which can attributed to high-profile cases both in this county and elsewhere in the country. The increase in sexual offences can be partly attributed to an increase in online offences such as indecent images and grooming. We have also seen a number of sexting incidents where crimes have been recorded for incidents involving child victims and offenders. This is another area that the Constabulary has focussed on to encourage any victim of a sexual offence, recent or non-recent, to report the incident.

“Anti-social behaviour, something that many members of the public feel strongly about, continues to see a significant year-on-year decrease with offences such as criminal damage and arson remaining static.

“Hate crime, which is historically under-reported, has increased. This can be attributed to an increased confidence in victims to come forward and compliance in crime recording. The Constabulary continues to work closely with all minority groups to ensure that those who are victims of hate crime can feel confident to report what has happened.

“The number of people who have died on the county’s roads, during the reporting period, has reduced, we will continue to work with partner agencies in order to ensure the county’s roads are safe for all road users.

“I am confident that across many different crime types we are seeing earlier intervention by officers and staff, as well as earlier reporting by victims so further incidents can be prevented.

“I am also reassured that when we ask those who have been victims of crime for their feedback that we still have high levels of satisfaction in the service they receive which is 88% for victims of crime and 81% for victims of ASB – this is a testament to the hard work of officers and staff who, despite the number of crimes recorded increasing, they continue to deliver a good service.

“The Office for National Statistics publishes data from the British Crime Survey of England and Wales that does not rely on victims coming forward to the police. This data shows that many crime types are under-reported which is why we strive to increase public confidence to tell us what is happening in the community. From the analysis of our own and national data we can reassure people that Cumbria remains an exceptionally safe place to live, work and visit.”

Police and Crime Commissioner, Peter McCall: “Any rise in crime needs careful scrutiny.   It is important that we are honest about the statistics and give the continued improvements made by the Constabulary in the way that they investigate, record and support victims that we are likely to see crime increase and we mustn’t shy away from this.

“Today, the Chief Constable has provided a detail explanation of why the crime statistics have increased.  The public need to be reassured that they are no more at risk despite the increase in recorded crime.  I will continue to monitor closely.

“I welcome that people have more confidence to come forward to report crimes especially domestic abuse and sexual offences.  I am really pleased that the message is being heard by victims and vulnerable people that is why I am supporting projects to reduce repeat victimisation and early intervention.  People must not suffer in silence which relates to crimes today or historic crimes and I encourage people to continue to come forward.

“We are fortunate in Cumbria to have some of the lowest crime levels in the country and it is important that we all continue to work together to keep each other safe especially as the nature of crime is changing at a quick pace.”