Cumbria Remains as 2nd Safest County in the Country

Cumbria’s Police and Crime Commissioner has today received at his Public Accountability Conference (PAC) an update from the Chief Constable about the increased levels of reported crime in the county.

Overall, recorded crime has increased by 29% over the last 12 months to 31 March 2019. In Cumbria, this equates to 8,268 extra crimes being reported and classified appropriately. There are two categories that have seen significant increases:

·         Violence against the person rose by 53.4% predominantly violence without injury.

“The increase in the number of crimes recorded during the latest financial year are in keeping with the national trend.

“The two main contributory factors to the increase are, firstly, changes to the way some offences are now classified and, secondly, the continued increase in confidence from members of the public to report what has happened. The Office for National Statistics (ONS) have themselves commented that the rise in recorded crime is influenced heavily by changes in reporting and recording practices.

”The Constabulary was one of only two forces to have recently been graded as outstanding for our crime recording practices following an inspection by Her Majesty’s Inspectorate of Constabulary and Fire & Rescue Services (HMICFRS). This is essential for us to understand how crime affects our communities and how we use our resources to effectively respond.

“The continued increase in public confidence to report crime is encouraging because we can identify those at harm at an earlier stage and provide them with appropriate safeguarding and support.

“One area where we have seen an increase is violence against the person. This crime type covers a wide range of offences, including violence without injury – which has seen a 74.8% increase which shows people have the confidence to report early so we can prevent injury. This area is certainly impacted by greater compliance by officers with crime recording practices, which can give reassurance that Cumbria remains a safe place.

“A theme running through the statistics is that the nature and scale of demand facing police in Cumbria is changing. In 2019 we are dealing with areas of increasing complexity compared to the more traditional crime types that officers would have dealt with ten years ago. To combat this we are making considered decisions as to how we ensure we effectively use our resources. This includes an innovative approach in launching a new cyber-crime unit that targets criminals who operate online. Such work to tackle the most complex crime is often unseen to the public and we have significant amount of resources working incredibly hard each day to keep people safe.

“Anti-social behaviour, something that many members of the public feel strongly about, continues to see a significant year-on-year decrease.

“I am confident that across many different crime types we are seeing earlier intervention by officers and staff, as well as earlier reporting by victims so further incidents can be prevented.

“As well at the outstanding grading by HMICFRS for crime data integrity, we were also graded overall as a good police force. This grading followed an independent inspection into numerous policing areas such as how we investigate and prevent crime, the service we provide to victims and our protection of vulnerable people. All of this provides us with confidence that Cumbria remains an exceptional.”

Police and Crime Commissioner, Peter McCall: “Of course the headline figure that crime has increased by 29% is concerning.  It is easy to misinterpret and sensationalise the data but it is important to look at the detail and when you start to look at the reasons for increased reporting, then you start to understand that there are good justifiable reasons, much of which is about changes in reporting methodology, but most importantly victims of crime are receiving a better level of service.

“My question to the Chief Constable has been – are we any more at risk of being a victim of crime in the county than 12 months ago.  I am assured by the Chief Constable that the actual level of crime in the county hasn’t increased but we are better at recording and getting an accurate perspective of what is happening.  Cumbria is still a very safe place.  This is evidenced by the number of anti-social behaviour incidents dropping by a fifth.

“The latest Crime Survey data for England and Wales published by the Office of National Statistics (ONS) also supports the Chief Constable’s assurance.  The report states that rises in some offence types for police recorded crime need to be interpreted with caution, as an increase in the number of offences recorded is unlikely to indicate a real rise, but rather largely reflects changes in reporting and recording practices.

“What is most important to me, is that people have the confidence to come forward to report crimes which they may not have done in the past.  The message is clear, please come forward and you will receive the support that you need – please do not suffer in silence.  We must not be focused on news headlines and I welcome the fact that crimes such as sexual violence and domestic abuse are being reported and this highlights the good work by the Constabulary and my Office to support victims at their most vulnerable.

“I will continue to hold the Chief Constable to account for the force’s performance at my Public Accountability Conferences where I receive regular updates and scrutinise how the Constabulary are addressing the changing nature of crime.

“Cumbria is a safe county with a strong performing police force.  We do have low levels of crime and together with the Constabulary we intend to keep it that way. 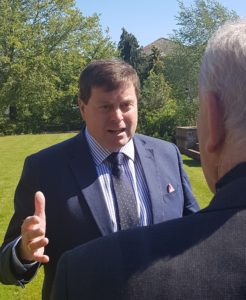