Cumbria remains one of the safest places in England and Wales

Cumbria’s Police and Crime Commissioner received an update from the Chief Constable about the increased levels of reported crime in the county at his Public Accountability Conference (PAC).

Overall, recorded crime in Cumbria has risen by 12% in the last year, however the county remains one of the safest places in England and Wales – while police continue to have success tackling the issues that matter most to people.

County lines drugs gangs, organised crime gangs that use vulnerable young people and adults to carry and sell drugs in areas outside of where the criminals live to avoid detection, have been broken up and jailed.

Anti-social behaviour rates have fallen by 4% in the last 12 months and, due to changes in crime recording methodology, some of this demand has moved across to being crime. The force has been rated ‘good’ in all areas by independent inspectors.

Cumbria has seen an increase in certain crime types in line with national crime trends. Despite this, the introduction of extra officers, the growth of neighbourhood teams and the investment in tackling online offending are all helping to tackle crime and keep the public safe.

Demand on the police continues to rise, with the constabulary receiving more than 362,400 calls in the 12 months to November. The average waiting time for 999s is five seconds – with calls being answered by the experienced, trained police officers who staff the command and control centre.

Police and Crime Commissioner, Peter McCall, said: “We always welcome these figures at PAC as it is really useful to see where crime has increased and decreased across the county.

“This meeting gives me the opportunity to scrutinise the force and find out why crime has increased over the past year and, more importantly, what is being done to address these figures.

“Overall crime in Cumbria has increased by 12% on the face of it, this is a large increase however there are many factors that contribute to this increase and some of the increase is welcome as it means that people have the confidence to come forward and report crimes such as domestic abuse.

“More incidents are now recorded, which would have been previously, and this is an important aspect for victims as they will get a better level of service from the police.

“The Force overall has done a fantastic job in 2019 with the arrests and prosecutions of county lines gangs, we’ve been able to add an additional 20 police officers to the force due to your support through council tax precept and we can see that anti-social behaviour has decreased as well.

“The message remains clear: Cumbria is one of the safest places to live and, compared to other counties across England and Wales, we have a relatively low crime rate and the Constabulary and I intend to keep the public as safe as possible.

“I will continue to hold the Chief Constable to account in future PAC meetings and aim to be as clear as possible with the public how the Constabulary are combatting these criminals.”

Chief Constable Michelle Skeer said: “Cumbria continues to record low crime rates, with the county having the third lowest level of all recorded crime in England and Wales.

“People in Cumbria were asked what the main crime issues were that concerned them – and among those that came near the top were drug dealing and anti-social behaviour.

“In the last year we have had major successes tackling county lines gangs targeting our communities, with organised crime groups broken up and significant sentences handed out at court.

“There are numerous examples of this. In north Cumbria we had a county lines group receive jail sentences totalling nearly 90 years. We have an ongoing operation in south Cumbria which has led to nearly 40 people being charged. In west Cumbria an operation has led to more than 25 arrests and drugs with a street value of more than £100,000 recovered.

“In terms of anti-social behaviour, across the county this has reduced by 38 per cent over the past three years.”

In the past year, Cumbria has seen the impact of the extra 25 officers recruited by the Constabulary through the council tax precept– the part of the council tax that pays for policing – introduced by the Police and Crime Commissioner.

Based on the frontline in communities across the county, their work has led to:

An extra 51 officers are also set to join by March 2021 as part of a national increase.

Reported crime types that increased in the year included historic crime and cyber- crime – both of which went up by more than 40 per cent.

Chief Constable Skeer said: “Any rise in crime is always a concern and something we take extremely seriously.

“What we have found over recent years is a continued increase in confidence from members of the public to report what has happened.

“The increase in cyber crime also reflects changes in society and technology. If you shop online, use social media or use email to communicate you could fall victim to an online criminal if you do not take care. The constabulary this year launched our new Cyber and Digital Crime Unit, with an investment in additional specialist services to deter digital criminals and help the victims they target.”

Chief Constable Skeer also explained other reasons that have led to increases in recorded crime. She added: “There have been changes to the way some offences are now classified and recorded, leading to a subsequent rise.

“We were rated outstanding in crime recording – one of only two forces in England and Wales to get this on first inspection. These improvements on recording have had an impact on figures.

“There are also increases in reports of crimes such as drugs and theft due to the proactive work we are doing targeting offenders. Rises in crime categories follow national trends.”

Chief Constable Skeer said: “Our 101 line is for non-emergencies only – and is used for queries or reports that are not time critical. This line is answered by experienced police officers. People who ring 101 will speak with an experienced police officer with the skills and knowledge to resolve queries quickly, without the need to be transferred or travel to a police station. The constabulary acknowledges issues around the 101 calls and takes issues seriously. We are currently undertaking a range of activities to improve processes and response to the public.” 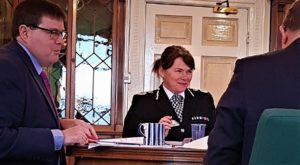