Funded by Cumbria’s Police and Crime Commissioner, Peter McCall, the CDCU opened in May 2019 and in the last three years have investigated 271 cyber-related offences, made 98 arrests and prosecuted 50 different criminals for 178 offences. They have also investigated 204 online child sex offences and, as a result, 168 children have been safeguarded.

The Unit have led and assisted with multiple operations since its launch including Operation Terbium, a small business fraud case that lost a significant amount of money due to their email account being hacked. The two offenders, Ben Botwright and Ovie Imiren received £5000 overall from the business. The Crown Prosecution Service (CPS) charged both offenders, Botwright receiving a 12-month suspended sentence and Imiren receiving 26 weeks imprisonment.

Operation Cabinet was another case that ended with a child sex offender being imprisoned. Darren Chambers was arrested for sexual communication with an undercover police officer, whom he believed to be a child. Images of children were found on his mobile phone and laptop whom he had sexually exploited. Some of these images were taken after Chambers was handed a sexual harm prevention order following a previous conviction for child sex offences. Chambers was convicted of 14 offences in January 2021 and sentenced to eight years in prison.

The CDCU also work on prevention, to help reduce the likelihood of local businesses and public being targeted by criminals online. They also work with the Chamber of Commerce to produce a podcast to spread cyber safety messages and hosts events with organisations such as the Women’s Institute to provide cyber advice. Regular online Q&A sessions are also held for the public with the last session attracting 525 participants.

Cumbria’s Police and Crime Commissioner, Peter McCall, said: “Technology is advancing so quickly, and criminals are using any method they can to target vulnerable members of the public.

“With cyber-crime continually growing, it is extremely important that we have a dedicated and expert unit to focus on the vast types of crime that can be committed online.

“The CDCU do an incredible job in such a difficult remit to police as many cyber criminals commit their crimes internationally, making it difficult to get convictions.

“This is why their prevention work is just as important as their investigative work: by educating the public and businesses on how to strengthen their online security we can reduce the likelihood of being targeted by these criminals.

“We can all do more to help keep ourselves and our families safe online and I would encourage everyone to check out www.getsafeonline.org for some easy steps to improve cyber safety.

“Not only have the CDCU put criminals behind bars, but they have also protected 168 children from becoming the victims of unimaginable crimes and saved them from future trauma.

“I had the opportunity to attend a warrant with members of the CDCU, to seize devices following intel of child sexual exploitation images and the professionalism and thoroughness of the team should be commended.

“I would stress to anyone who may be tempted to abuse children online, that the police will pursue you robustly.

“In the past three years, the team have done an outstanding job in a challenging and increasing area of work, they will continue to pursue criminals who operate online.

“This is a dynamic but unseen aspect of policing which the public will rarely see but I hope are assured to know that we are and will continue to tackle online criminals robustly.”

Detective Inspector, Andy Myers, from the Cyber and Digital Crime Unit, said: “In the three years that the unit have been running we have seen significant success in bringing offenders to justice, assisting our colleagues and safeguarding victims.

“We have also carried out a lot of work to educate people on staying safe online. If you shop and communicate online or have social media, you could fall victim to an online criminal.

“Cyber criminals can hide behind their screens, but their actions can have a huge impact on businesses, individuals, vulnerable members of society and children.

“Our priority is to protect vulnerable victims and would urge people to take the time to familiarise themselves with tips on staying safe online for themselves, family, and children.

“This is a dedicated unit staffed with officers trained and skilled to specifically deal with these type of offences – and I can reassure the people of Cumbria that the team will continue to work tirelessly behind-the-scenes to keep children and other vulnerable people safe, as well as track down anyone exploiting them.”

Further advice around online safety can be found on our here, via CEOP and Thinkuknow

Anyone with information or if you have been a victim to these offences can report online at www.cumbria.police.uk/report-it.You can also phone on 101. 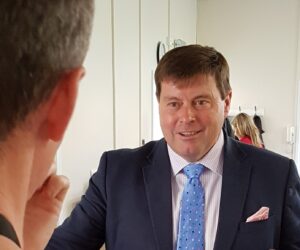