Cumbria’s Police and Crime Commissioner (PCC) launches his sixth annual report today, highlighting progress made towards the objectives in his new Police and Crime Plan 2021-2024, annual crime figures and a summary of the financial year.

Each year the Office of the Police and Crime Commissioner produces an annual report to inform the public, partners and stakeholders what has been happening in the previous 12 months. The annual report describes how the PCC has carried out his legal duties during the year.

Talking about the report, Peter McCall comments: “Following my re-election in May 2021, we have developed a new Police and Crime Plan, drawing on the results of a public consultation, a strategic analysis of crime and partner agencies feedback. The Plan, launched in December, contains the police and crime objectives for the next four years, which together, contribute towards achieving my overall aim of ‘Keeping Cumbria Safe’.

“In my last annual report, I noted that due to the pandemic, there had been a sustained fall in recorded crime nationally, which was reflected here in Cumbria. We also correctly anticipated as we recovered and moved into the post covid phase, that crime figures would rise.

“Put simply, it is all about opportunity – when we reduce opportunities for crime to take place, crime goes down and when we return back to the normal ways of living, sadly, so do criminals and crime return to pre-pandemic levels.

“However, I must note that throughout the last two years, the Police have put the needs of others first. They have been working with increased pace, with much uncertainty and frequently changing guidance, with unprecedented effects on our freedom of movement. This has been a change for us all, not least for the Police who, without the thought of their own safety, have worked tirelessly to keep us all safe. I would like to thank them for their relentless commitment and hard work.

“During the year, the Constabulary received results of the latest PEEL inspection, conducted by Her Majesty’s Inspectorate of Constabulary, Fire and Rescue Services (HMICFRS). The report praised the hard work and dedication of our officers, staff and departments. Cumbria Police were rated as ‘Outstanding’ in one area and with very strong performance across the board, the report highlighted many positive ways of working, but we should never be complacent. There are always areas where we can make improvements, and the Force remains relentless in striving to provide the highest level of services for residents and visitors in Cumbria.”

Alternatively, contact the office on commissioner@cumbria-pcc.gov.uk or call on 01768 217734 for a paper copy. 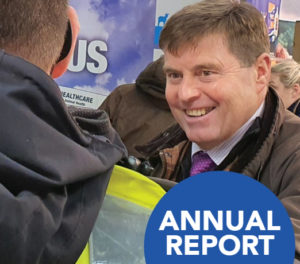