Drug Addiction Film Supported by the Police and Crime Commissioner

Cumbria’s Police and Crime Commissioner, Peter McCall is visiting Signal Media Studios in Barrow at 1.30 on Tuesday 4 February, to see first-hand how the Community Fund has supported the ‘Insight into Addiction’ film, using real life experiences of Barrow residents.

Peter McCall comments: “The ‘Insight into Addiction’ film will raise awareness of the effects and causes of drug addiction and promote a greater understanding of the ripple effect it has on our local communities.

“Supporting projects such as this with grants from the Community Fund helps partners to work together on specific and very real problems happening in and around the Barrow area.

“I believe this film will have a positive impact on the local community and start discussions about drugs addictions, local residents and their recovery journeys and ultimately, create a greater level of empathy around this difficult subject.”

Kerry Kolbe, Signal Media comment: “The filmmaking team have been carefully building a trusting relationship with the participants involved on the project, in particular, those in recovery within The Well.

“We have been impressed by how open the participants have been about their journeys and are very grateful for their input.

“The film’s director has gone to great lengths to ensure that everyone is fully informed about the purpose of the film and do not feel pressured to take part, as much of the subject matter is very personal.

“We have filmed some harrowing but amazing recovery stories during the research process and participants have taken turns to interview each other and record each other’s testimonies.

“We aim to film some reconstructions of the interviews so far filmed and interview support workers from The Well, Community Police, Unity the drug and alcohol charity and the Mental Health services.

“We hope the film will be shown at local schools and various community groups to help open up discussion and promote understanding of the varied effects and causes of drug addiction.”

Inspector Jim Bailey said: “It is well documented that there is an issue with drug addiction within Barrow. I hope this helps to raise awareness of the effects of drugs to the local community and act as a deterrent to others.

“We continuously work with partners from The Well and Unity to try break the chain of addiction and help people on the road to recovery.

“Officers have also been out in local schools to educate young people on the consequences of getting involved in taking drugs, dealing and the impact it could have on their lives, health, relationships and community.” 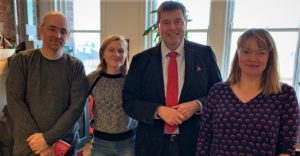