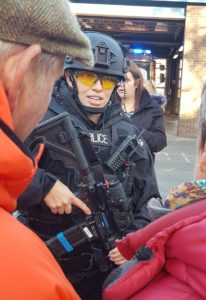 Kendal Emergency Services day at Busher Walk on Saturday 27th October provided an opportunity for Kendal Police and partner agencies to educate and engage with the public about the work they undertake every day in the community, and also provided the public with an opportunity to meet their local policing team.

There were demonstrations from various operational capabilities of Cumbria Constabulary, Kendal Fire and Rescue, Kendal Mountain Rescue and North West Ambulance Services. The event also included numerous displays for the public to watch, including:

“Saturday’s event was a great opportunity for the public to meet some of the people who work hard in the local community to keep Kendal and the surrounding communities safe.

“There were some fantastic displays put on to showcase the capability of emergency services personnel to tackle crime and disorder and respond in emergency situations.

“It also provided a great opportunity for further engagement between the public and their local emergency response teams.

“I would like to thank the many people and all the other agencies that came along to support this event.”

“This event proved to be a great family day out, and an opportunity for the public to get a real insight into the work not just of the police, but also our partners in the other emergency services.  There were many impressive displays of some of the ways that the police tackle crime and disorder, which highlighted some of the challenges they face day-to-day.  I believe it was also an excellent chance for the public to talk to their local policing team.”

“This is one of my favourite days of the year, the atmosphere was amazing and members of the public got to see displays from a number of different services and how they are committed in keeping the local community safe!!

“The event was a real team effort between all of the partner agencies and I would like to say a massive thank you to everyone involved.