New recruits one year on

The first police officers to be recruited in Cumbria as part of the Government’s Operation Uplift have now been in post for more than a year. Cumbria was one of the first counties in the UK to recruit for the scheme with nine recruits beginning their training in August 2019.

Since finishing their training in January 2020, the recruits have been placed across the county.

Constable Chloe Carruthers was one of the first recruits of Operation Uplift in Cumbria. She is now based in Durranhill Police Station, Carlisle, and has had a busy first year as a Police Officer. Since completing her training, Chloe has handled several significant pieces of Police work. Chloe responded to a case of domestic violence, both physical and coercive, where the victim had suffered over a period of ten years from her husband. Chloe took the initial account from the victim and her children and were all placed in emergency accommodation and social services were contacted.

Chloe dealt with a home burglary in which she conducted an area search and carried out a stop and search on someone that matched the description of the burglar. She arrested a male on suspicion of burglary on which he was interviewed, charged and remanded.

Constable Carruthers also handled a fraud case that involved work with Cheshire Constabulary. Chloe marked a vehicle involved in the crime, which resulted in Cheshire police stop checking the motor and seizing a fraudulent bank card and check book. The suspect was found to have committed several fraud offences across the country. A referral was made with Action Fraud and a file was built by a Detective Constable due to the amount of evidence within the case.

Speaking on her time with Cumbria Constabulary, Chloe said: “My confidence has grown quickly regarding dealing with incidents in the first instance.

“I have enjoyed my first year within the Constabulary and feel comfortable I have support from my colleagues and supervisors when required.”

Cumbria’s Police and Crime Commissioner, Peter McCall, said: “All of the new recruits are doing a phenomenal job – they were the very first recruits we brought in under Operation Uplift which is part of the Government’s promise of an extra 20,000 officers for the country.

“We were one of the first counties to recruit under this and it’s fantastic that we can get more officers out on our streets where I know residents want to see them, making Cumbria even safer.

“Through the increase in council tax and the first phase of Operation Uplift we have been able to recruit an additional 96 officers into Cumbria on top of our normal recruitment of police in Cumbria.

“When I came into post we had 1120 Police Officers and as at last week we were at 1234, so slightly over establishment with more to come and they’re all making a difference.

“The additional officers have been deployed across the county and into our more rural communities which allows response times to lessen and takes pressure off urban-based officers from covering a wider area allowing them to focus on localised crime.

“Of course, not every town has seen additional officers yet and there is more to do.

“Our new recruits’ first year in the job has definitely been an abnormal one with the challenges of COVID-19 along with all the other issues facing police officers every day, but I know that they will have gained an incredible amount of experience in this time.

“I am constantly impressed when I talk to officers both more mature and our new recruits that they are all absolutely committed to making a positive difference to keep people safe.

“In return it is important we do all we can to ensure there are enough of them and that as members of the public we work together in partnership with the police to make our communities safe from crime.”

T/Chief Superintendent Rob O’Connor, Cumbria Constabulary, said: “In Cumbria, we made the decision to move quickly to ensure we could maximise the benefits of introducing additional officers into our communities.

“We were one of the first forces in the country to have recruited our full allocation from the Government’s recruitment drive, which has assisted our officers and staff in protecting people across the county.

“The role of a police officer remains a challenging one, particularly given the circumstances we continue to face due to the pandemic.

“Pleasingly, we have seen that our recent recruits have all shown the desire to meet such challenges and make a real difference to all of our communities.”

**Please note that this image was taken pre-COVID-19 pandemic** 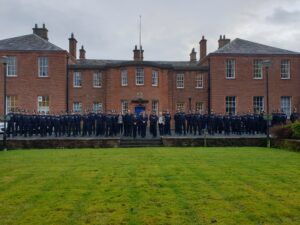