New Survey Asking the Public Their Views on Policing in Cumbria

Cumbria’s Police and Crime Commissioner Peter McCall and Cumbria Constabulary have launched a consultation survey to seek the public’s views on policing in Cumbria.

The police are constantly adapting to the ever evolving and conflicting demands of crime and the many forms it can take, such as preventing and detecting crime. Some offences are visible such as criminal damage and public order. Others remain largely unseen, and include offences of domestic abuse, child sexual exploitation and human trafficking. Most offences now also involve some form of digital footprint, or cyber element.

Knowing that Cumbria police will always respond to emergency calls with the highest priority, the recently launched consultation asks the public to prioritise what they think are the most important issues that the police should deal with. The survey also asks people to highlight what is happening in their local area that concerns them, if they have experienced a crime in the last 12 months, if they have reported any incidents to the police recently, and if not, why not.

Peter McCall, Cumbria’s Police and Crime Commissioner comments: “This pulse survey is an opportunity for me to hear the views of local residents of Cumbria and what they think the police can do to make our county even safer.

“I urge people to complete this short questionnaire so that we may accurately respond in ways that we know will make a real difference in our local villages and towns.

“Please take time to complete this survey and help us to improve on what I already believe to be an effective and efficient service.”

Chief Constable Michelle Skeer, Cumbria Constabulary said: “This is an opportunity for local people to let the Constabulary know how it can provide an even better service.

“Over the past few years the Constabulary has continued to do all it can to support the communities it serves. We have had many successes including being independently assessed as a good police force and outstanding for how we deal with victims of crime through our ethical approach to crime recording. We are not complacent and we are always seeking ways in which we can further improve.

“I’d encourage anyone to take the time to complete the short survey and provide us their feedback.” 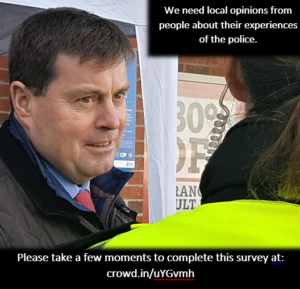