A national report which has recognised Cumbria Constabulary’s Crime Data Integrity with the highest possible award has been welcomed by Cumbria’s Police and Crime Commissioner Peter McCall. The Constabulary has been graded as outstanding in the latest inspection by Her Majesty’s Inspectorate of Constabulary and Fire & Rescue Services (HMICFRS).

Cumbria Constabulary is one of only two forces, from the 34 inspected that have been judged as achieving an outstanding performance. The force has made substantial progress to report crime more accurately and ensure that victims are at the heart of its crime-recording arrangements.

Commenting on the report, Peter McCall said: “This truly is an exceptional report, only one other force in the country has had this Outstanding grade and it is a testament to the excellent leadership of the Chief Constable and her team.

“It is incredibly important that Crime Recording is carried out correctly to understand the real picture as to what crime is taking place, to ensure the right response from the police is provided and the best possible service to victims and people of Cumbria.

“This Outstanding grade from HMICFRS, the experts who inspect every force in the country, confirms that we in Cumbria are very well served by our police officers and staff at all levels.  We have a dedicated and incredibly professional force.

“I hope that everyone in Cumbria will wish to join me in publicly congratulating the Chief Constable, our police officers, PCSOs staff and volunteers for the exceptional work they do every day, often in the most challenging circumstances, to make Cumbria one of the safest counties in the country.”

Deputy Chief Constable Mark Webster, Cumbria Constabulary, said: “We are delighted that the Constabulary has been recognised by HMICFRS as ‘Outstanding’ for the way we record crime accurately.

“In recent years there have been many changes to how crime is recorded and it is a great achievement to be one of only two forces that received this grading.

“The importance of getting crime recording right is essential for the Constabulary in understanding how crime affects our communities and how we use our resources to effectively respond. Accurate data enables us to respond to emerging threats and risk so we can protect victims and vulnerable people. Among the numerous positives within the report was the finding that our crime-recording accuracy for sexual offences was deemed exceptional.

“At the heart of our crime-recording processes is the emphasis we place on victims so they can be confident that their report will be taken seriously, safeguarding measures can be put in place and they can receive support. The early identification of victims is also crucial to us being able to pursue offenders. To be independently assessed as ‘Outstanding’ provides further confidence in our police force to those who live, work and visit Cumbria.

“The demands police forces face has changed dramatically in recent years with crime becoming increasingly more complex to deal with. We have a proven track record of dealing with complex crime as evidenced recently in an operation that led to eight offenders jailed for 40 years collectively for their roles in conspiring to commit ATM attacks across North and West Cumbria.

“We also effectively investigate non-recent crimes and help provide justice for victims regardless of when the offence was committed. This has again been evidenced recently with a number of successful convictions this year, across the county, concerning non-recent sexual abuse cases. Investigations into allegations of non-recent abuse can be some of the most complex and challenging undertaken. Because of the complexity of these cases, investigations in this area will frequently take some considerable time to properly complete, such as a recent example in March this year where a man was jailed for eight years for sexual abusing two young girls in South Cumbria more than a decade ago.

“Earlier this week a man in the south of the county was jailed for eight years after he impersonated a woman online and invited people to abuse a child. This is a prime example of how effective the Constabulary are at dealing with complex crime and ensuring a strong case is built to put offenders behind bars so they cannot pose further risk to the public.

“This grading is testament to the fantastic job our staff do for the people of Cumbria on a daily basis. This is not a time to be complacent and we are determined to further improve the excellent service we supply to our communities.” 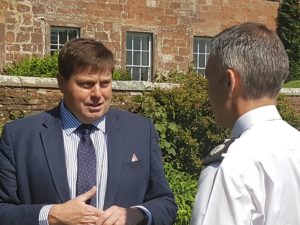