Cumbria’s Police and Crime Commissioner, Peter McCall and Cumbria Constabulary have met with representatives from the farming community, suppliers, insurers and quad bike manufacturers to look at ways to reduce the number of quad bikes that have been stolen in Cumbria.

The meeting at Police HQ, Penrith heard that has been an increase in quad bike thefts in the county over recent months with 86 quad bikes thefts being investigated by police in the last 12 months.  The majority of crimes took place in the later part of 2019 during the hours of darkness.

The meeting focused on what more can be done by farmers, suppliers, insurers, manufacturers and police to ensure that quad bikes are not an easy target.

Police and Crime Commissioner, Peter McCall, said: “We are incredibly fortunate in Cumbria that we have low levels of crime in our rural communities so when there is an increase in any type of crime the Police want to deal with it robustly.

“Any victim of theft will tell you the feeling of violation they have felt when their property is broken in to and taken from them. We don’t want anyone to feel this way.

“We had a really constructive and frank meeting with a number of actions being taken away by the relevant parties.  It is very apparent that that the solution doesn’t rest with one party but it will require a number of solutions across manufactures, insurers, farmers and the police to bring a long-term solution similar to the issues that were addressed some years ago around car crime.   I am optimistic that a solution can be found but as is often the case it will take all parties to work together.  I met with the policing Minister this week and raised the issue of a lack of registration of quad bikes/all-terrain vehicles which would help to hinder the sale of stolen vehicles.

“As Police and Crime Commissioner, I have part-funded a number of events across the county to focus on the security options available.  Details will be available in the next few weeks.”

Cumbria Constabulary Assistant Chief Constable Andy Slattery added: “Quad bike thefts have increased in the county and it is a similar picture across the country. We all have a responsibility that Cumbria doesn’t become an easy target for criminals.

“Often when the police become involved it is too late.  We would urge everyone in rural communities to make it as difficult as possible for the thieves.  As a bare minimum all farmers should ensure that the keys are removed and overnight your quad bike is in a locked shed.  Where possible all the available options should be explored around marking and our PCSOs are trained to provide you with the information about the available marking schemes.

“Where trackers are fitted it is a significant help to the police investigation.  Recently, where a tracker has been fitted it has resulted in two arrests.

“We also need the rural community to be our eyes and ears.  If you see anything suspicious please report it via 101 or 101 emails.  A specialist rural crime reporting line is also available to those who want to report suspicious activity anonymously 0800 783 0137.

“We look forward to working with the Commissioner over the next few months as target hardening events take place across the county.” 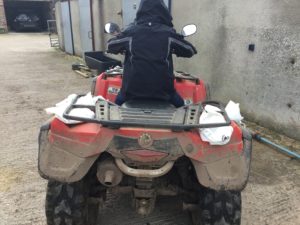