Police and Crime Commissioner, Colonel Peter McCall has been appointed Honorary Colonel of Cumbria Army Cadet Force (ACF) in succession to Mrs Susan Villiers-Smith.  The appointment has been approved by Her Majesty The Queen and published in the London Gazette, Colonel McCall assumes the appointment from 1 October 2019.

The Honorary Colonel acts in support of the Commandant and his staff in supporting ACF activities across the county.

Colonel McCall said “I am humbled and honoured to be ‘recalled to the colours’ in support of our cadets and the superb volunteers.  The volunteers give so much time to keep this fantastic organisation running and providing exceptional training and opportunity to so many youngsters across our county.  As a former soldier of 34 years’ experience I have seen and been privileged to work with so many young men and women whose careers started in the cadets and who have gone on to enjoy outstanding careers.  But Cadets are not just about recruiting, that is not the primary aim.

“Army Cadets give incredible experiences to young people which helps them to develop self-confidence, discipline, values and standards, teamwork, resilience and so much more. These skills are developed in a safe environment, with great leadership and a sense of fun.  As Police and Crime Commissioner I see every day the genuine value of all youth organisations such as Scouts, Police Cadets and of course our Military Service Cadets. I’ve also seen the opportunities and experiences they offer to our young people, so I am very pleased to do whatever I can to support the Commandant and his team as they work to reach even more young people.

“Of course it is important to recognise the fact that like so many organisations the Army Cadets rely heavily on volunteers. I hope to meet them in coming months to thank them for their service, and to encourage others to join their ranks. They are always looking for volunteers and I can guarantee that anyone pitching in will get a huge amount of satisfaction from the experience. I’d particularly like to encourage veterans to consider stepping up, their experience will bring so much to the organisation.

“Meanwhile I look forward to supporting the Cadets where I can and meeting as many of them and our volunteer staff as possible.” 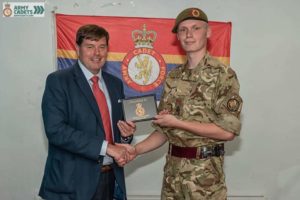