In 2021, the Home Office launched a Violence against Women and Girls (VAWG) Strategy with four distinct priorities: Prioritising Prevention, Supporting Victims, Pursuing Perpetrators and Strengthening the System. Cumbria’s PCC has committed to these priorities to help create a safer society for women and girls.

In the last 12 months, the Office of the Police and Crime Commissioner has successfully bid for £978,508 from the Government to enhance the safety of women and girls, and support those who have been subjected to domestic abuse and sexual violence.

The Safety of Women at Night (SWaN) funding provided £116,925 to the PCC, in November 2021, with a specific focus on Carlisle during the night-time economy. The funding paid for Crimestoppers campaigns to raise awareness around women’s safety at night. The SWaN funding paid for the training of 17 volunteers from Cumbria University as ‘Safer Streets Volunteers’ (SSV) who will be based at the new welfare hub on Saturdays from Easter onwards, outside of the train station and city centre. The fund also paid for two Safer Streets Officers, who will work alongside the street pastors, to provide with a safe person to approach if they feel vulnerable. In addition, the OPCC are working with Cumbria University and Cumbria Police to deliver an online production for secondary schools that highlights unwanted attention, sexual harassment, and inappropriate behaviour in the night-time economy. The production will be premiered at a Women’s Safety seminar later this month at Cumbria University and will be attended by Year 10 students from across Carlisle.  The SWaN funding will also assist with the development of a night-time charter that various establishments will be invited to sign-up to and make pledges to create a safe environment for their female patrons. The night-time economy charter will launch later in the year.

The Safer Streets Funding round three (SSF3) successful bid of £191,583 focuses on Whitehaven and has been used to deliver active-by stander training to 530 local people, with another 500 still to complete the course, new lighting and CCTV in Castle Park and a countywide campaign highlighting the facts around consent and harassment.

The PCC also received £600,000 from the Ministry of Justice Sexual Violence and Domestic Abuse Fund and commissioned Victim Support to develop a new service to support children and young people who have witnessed or experienced domestic abuse. The Children and Young People Domestic Abuse service works with those aged between 8-18 who are victims or witnesses of domestic abuse and are living in or have experienced domestic abuse in households assessed as at high risk of harm.

There are three women’s centres around Cumbria in Barrow, Whitehaven, and Carlisle to help support women in their time of need. Women’s Community Matters, Barrow, can help with issues like domestic and sexual abuse, benefits and housing issues and mental wellbeing. Women’s Community Matters also has an outreach centre in Kendal Town Hall on Tuesdays. Women Out West, Whitehaven, can provide emotional support and advice on domestic abuse. They can also provide information on other services that can help. Gateway 4 Women, Carlisle, provides support on issues like domestic abuse, mental wellbeing, homelessness, housing etc. and can also provide information on other domestic and sexual abuse services. Cumbria’s Police and Crime Commissioner has been supporting the women’s centres for several years.

Since coming in to post as PCC, Peter McCall also commissions various services across the county to help support those who have experienced domestic abuse and sexual violence:

Cumbria’s Police and Crime Commissioner, Peter McCall, said: “In the last year, the fight to prevent violence against women and girls has become a top priority for many organisations.

“Supporting victims and preventing crimes has always been one of my top priorities and over the last year, I have dedicated time and resources to prioritising reducing violence against women and girls in Cumbria.

“It is not the responsibility of women and girls to keep themselves safe – it is the duty of society to keep them safe.

“The last 12 months, my office has secured just under £1million to help prevent violence against women and girls and support those who have been subjected to it.

“Ending violence against women and girls, unfortunately, is not a quick fix. It’s a long-term effort that everyone needs to work on to create a safer environment and change the perception of ‘doing nothing is the right thing’ to ‘speaking against it is the right thing’.

“We all have a part to play in making our communities safer for women and girls, I encourage everyone to speak out against any inappropriate behaviour when it is safe to do so or call the Police on 101, or 999.

“The rise in reports could be seen a negative. However, the fact that more women and girls feel safe to report these crimes to the Police is a positive and I would encourage anyone that has experienced sexual violence and/or rape to please come forward and report it – your report will be taken seriously.

“If anyone has been a victim of violence, please reach out to one of the many services available to you in Cumbria.

“We are striving to not only improve trust in the public but to ensure the county is safe for women and girls everywhere, always, in all areas of the county and at all times of the day and night, whilst relentlessly pursuing perpetrators.

“By highlighting violence against women and girls as a priority area across the Constabulary, we are able to direct resources in this direction. These steps we are taking are significant but are just the beginning.

“We also work closely with our partner agencies and community groups to ensure that the approach to keeping women and girls safe in Cumbria is coordinated and effective.

“If you have been a victim of crime, please contact the police. All reports are taken seriously and are subject of thorough investigation. Alongside any investigation, is a commitment to ensuring that victims receive the appropriate support.” 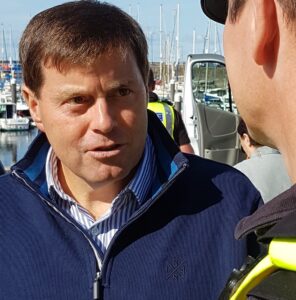