PCC meets with Cumbria Constabulary to discuss crime in the North

Cumbria’s Police and Crime Commissioner, Peter McCall, was out and about with police in the North of the county this week to discuss current crime issues including anti-social behaviour. The PCC met with PC Heidi Underwood and PCSO Amy Lambert in Carlisle to talk about the current crime trends the Police are seeing in the area, what’s being done to tackle these trends and what is being done to get a grip on them.

During the meeting, the PCC visited Hammonds Pond and Harraby to find out more about the anti-social behaviour that has taken place in the area. Most of the low-level anti-social behaviour in the area is caused by young people. Some of these behaviours include small fires, graffiti, vandalism and drug use. The Police work with these young people, their families and partnership agencies including housing, youth groups and the local focus hub to reduce re-offending and keeping young people out of the Criminal Justice System.

The PCC also met with Special Constable Susan Holliday and PC Nick Leigh, the rural officers based in Brampton to talk about crime affecting the county’s rural areas and to find out what the officers have achieved since being placed in 2020. The issues raised by the public to the Constabulary and PCC were around speeding, drug dealing and rural crime including theft and wildlife crime.

To tackle the speeding, Officers have been conducting extra speed checks in the area and liaising with speed camera operators to increase their presence in the community. Officers have been obtaining warrants and executing them to tackle drug dealing in the community and actively visiting known addresses to gather intelligence. This intel has been shared with other officers leading to positive stop searches of those individuals. To tackle wildlife crime, the Police have taken positive action against poachers, actively utilising stop search powers and looking to prosecute when the evidence is available. The Police also give Community Protection Warning Notices to those who are poaching which has reduced calls for service in the area.

Speaking on these meetings, PCC Peter McCall, said: “It’s part of my role as Police and Crime Commissioner to hold the Force to account and find out more about how they are tackling crime and issues raised to me by the public.

“I want to make sure that crime, including low-level anti-social behaviour, is being dealt with so that I can assure the members of the public that the Police are doing everything in their power to reduce crime.

“This routine visit has given me an incredibly clear view of what is happening in the North of the county, both in urban and rural areas, and I am pleased to hear that the Police are doing a great job.

“The Constabulary do a fantastic job but it is important that we ensure this great level of service continues right across the county.”

Temporary Chief Inspector for North Cumbria, Gill Cherry, said: “Our officers work hard for their local communities all-year-round and it was good to highlight to Mr McCall the many initiatives and methods being used to tackle any emerging or ongoing issues.

“We always listen to the concerns of our communities and work with our partners to address the issues causing problems in the north of the county.” 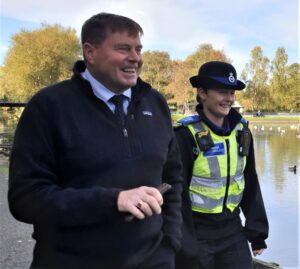