PCC meets with Cumbria Constabulary to discuss crime in the West

Cumbria’s Police and Crime Commissioner, Peter McCall, has been out and about around the county meeting with Officers in the west of the county to discuss issues of concern to the public including anti-social behaviour. The PCC met with Temporary Superintendent Gaynor Wardle, Sergeant Mitchell Franks and PCSO Alison Renney in Workington to talk about the current crime trends the Police are seeing in Workington and surrounding areas, importantly, what’s being done to tackle these issues.

During the meeting, the Constabulary raised issues regarding the rise of anti-social behaviour (ASB) in Workington, mainly linked to young people and children, following the easing of lockdown restrictions. The Constabulary, alongside partners, are working towards long term solutions to tackle ASB.  These solutions include looking to increase youth provisions in the area and meeting with businesses to understand the problem more and conducting crime prevention surveys to help improve security. Extra CCTV has been installed in a car park that is a main area for ASB, increased Police patrols with an ASB focus resulting in children being dispersed, cannabis being seized and children being referred to Youth Offending as a result and advice being given about use of electric scooters. Education around ASB in schools has also began.

The PCC and Superintendent Wardle also met with Constable Darren Cook one of the rural officers based in Wigton, alongside Constable Leesa Edwards, Constable Lisa Law,  PSCO Kerry Harris and PCSO Emma Light to talk about crime affecting the county’s rural areas and importantly to understand the effect placing officers into rural communities is beginning to have since they were deployed in late 2020. Anti-social behaviour was a local issue in Wigton with young people congregating around derelict buildings to drink, use drugs and occasionally set fires. The buildings were secured and call-outs around anti-social behaviour in the area have reduced. Anti-social driving (ASD) was also raised as a recent issue, especially amongst younger drivers. Local officers have now built a positive relationship with many of the individuals and locals are more receptive to being asked to move along, which has seen a reduction in ASD.

Speaking on these meetings, PCC Peter McCall, said: “It’s an important part of my role as Police and Crime Commissioner to hold the Force to account for the resource we put into policing and find out how effective they are in tackling crime and the issues which concern the public.

“The last year has been challenging for everyone and not least for the Constabulary who  have not only had to deal with crime but also the pandemic, they have been right at the front end of this, with huge additional demand on all offices and staff and they should be commended for their hard work in such unprecedented times.

“Nevertheless, we need to focus on crime and keeping our communities safe.  We need to ensure that crime, including low-level anti-social behaviour, is being dealt with so that I can assure the members of the public that the Police are doing everything in their power to reduce crime and keep us safe.

“Getting out to see our officers on the ground is the best way to understand what they are dealing with day to day and I have seen today the commitment and hard work which continues, working with other agencies to deal with a range of issues.

“It’s also an opportunity to hear about issues which may be of concern to Police officers and staff in order to try and alleviate these and to thank Officers for doing a great job over the last difficult year on our behalf.

“I will be visiting policing teams in the north and south of the county over the coming weeks.”

“Officers and staff have adapted to help limit the spread of the virus as well as keeping people safe, preventing, and solving crime.

“Anti-Social behaviour continues to be a priority and in recent weeks we have run a number of operations to tackle the issues raised to us by the public.

“We would encourage the community to continue to report such incidents to us so we can target our resources accordingly.

“This work also includes our Child-Centred policing team to identify those children in need of support and intervention to improve their lives and divert them away from crime.

“At the end of last year, west Cumbria benefited from officers being introduced back into rural communities, Wigton and Keswick.

“This has been beneficial to both officers and the communities, providing a recognisable presence and tackling issues within the local community.

“There have also been many other notable developments which took place to support our communities and provide them with the best possible policing service over the last year.

“Our officers continue to work closely with partner agencies and the communities we serve to address concerns or issues that arise.” 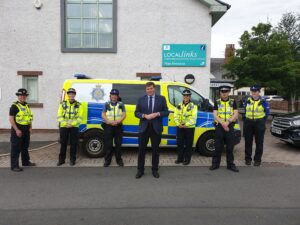