Cumbria’s Police and Crime Commissioner today received an update from the Deputy Chief Constable on Violence Against Women and Girls (VAWG) at his Public Accountability Conference (PAC). VAWG has been identified by the Constabulary as an area for special attention, in acknowledgement that offences against women and girls are both increasing and disproportionate.

At the PAC, the Constabulary provided specific, practical steps taken to enhance the way such offending is dealt with at every stage.

When a crime is reported, the call is taken by a police officer in the Control Room who is able to carry out an immediate THRIVESC (Threat, Harm, Risk, Investigation, Vulnerability, Evidence, Safeguarding and Crime) to ensure everything is covered at the first contact and that all VAWG-related calls are both taken seriously and treated as a priority.

Additional training in reviewing domestic abuse cases have been implemented with the aim of driving up the number of investigations which result in a referral to the Crown Prosecution Service (CPS) for charge and reducing the number which result in no further action.

The Constabulary’s Operation Dart is a proactive operation whereby each area identifies its highest-risk perpetrators of domestic abuse and works daily on targeting activity to secure outcomes, ranging from safeguarding potential victims to arresting and charging offenders.

The Constabulary is working closer than ever with partners, including the Crown Prosecution Service. Rape Scrutiny Panels are held regularly to look at the learning from cases and investigations, both those which resulted in a charge and those which did not, to ensure that lessons are not lost.

The Constabulary is also currently trialing a Rape Surgery which sees all rape cases with a supportive victim and known offender, be discussed with a dedicated Rape and Serious Sexual Offences (RASSO) lawyer.

This is providing further opportunities for the police and CPS to agree investigative strategies to ensure issues are addressed prior to a file being submitted to the CPS for charging advice. This will reduce the necessity for multiple action plans and speed up the investigation and decision-making process, thereby improving the quality and timeliness of investigations and increasing referral rates to the CPS, and ultimately the outcomes and convictions.

Cumbria’s Police and Crime Commissioner, Peter McCall, said: “Violence against women and girls is at the forefront as a priority in Cumbria and I welcome this update on the additional developments the force is making to tackle this issue.

“It is through these updates, at meetings such as the Public Accountability Conferences, where I hold the Chief Constable to account, that I am truly able to see and understand first-hand, what measures are being taken to keep  women and girls safe everywhere.

These extra measures are just the start of tackling our key priority area of violence against women and girls and I hope will reassure the public that extra resources are continually being put in place across the county.”

Chief Superintendent Lisa Hogan said: “At Cumbria Constabulary we have not only identified violence against women and girls as a priority issue but are taking practical steps to help our officers better safeguard women and get improved outcomes for survivors of abuse.

“We are striving to not only improve trust in the public but to ensure the county is safe for women and girls everywhere, always, in all areas of the county and at all times of the day and night, whilst relentlessly pursuing perpetrators.

“By highlighting VAWG as a priority area across the Constabulary, we are able to direct resources in this direction. These steps we are taking are significant but are just the beginning. There is more we can do and will do.” 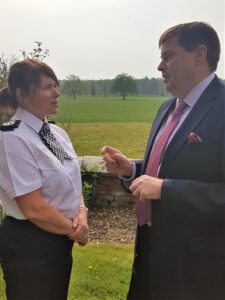