Police and Crime Commissioner (PCC), Peter McCall is responsible for setting the Cumbria Fire and Rescue Service (CFRS) portion of council tax for 2023-24. The PCC is today opening the council tax precept consultation, asking for public feedback on the budget proposal for the fire service.

CFRS is partially funded by the public through council tax and by businesses through business rates. This is the first year that PCC Peter McCall is responsible for CFRS’s budget after becoming the shadow Police, Fire and Crime Commissioner on 1 January 2023 and will take on full responsibility for the service’s governance on 1 April 2023.

Commenting on the council tax consultation, PCC Peter McCall, said: “As a result of Local Government Reform (LGR), I now have the responsibility each year to set the council tax precept levels for Cumbria Fire and Rescue Service.

“This is not a new charge to residents as the Fire element was previously included in the elements of council tax that was paid to Cumbria County Council.  Following the LGR changes, the charge is now visible and is clearly articulated so that residents will now know what they pay for Fire and Rescue Services.

“Setting the council tax precept is of course never easy and is especially challenging this year due to the current financial situation.

“I am acutely aware of the pressure that the cost-of-living crisis is placing on people across the county.  This pressure is also impacting on the fire budgets due to salary increases, rising cost of fuel and utilities and must be balanced against the requirement to maintain the current level of service that we have rightly come to expect in Cumbria which keeps us all safe.

“The Government has indicated that it expects Commissioners to increase the fire level of council tax precept by £5 from 1st April, this decision effectively means that I have no alternative than to propose to increase in line with the Government expectation.

“Therefore, I am reluctantly proposing to increase the fire council tax precept element by £5 (10p a week/or just over a 1p a day) which would take the annual cost from £85 to £90 per household based on a Band D property. In Cumbria, the majority of properties are Band D or below which means most households in the county will be paying £5. Whilst this offsets some of the inflationary pressures on the budget it is still well below national inflation levels and the budget will continue to have significant challenges which I will have to manage.

“If the council tax level is not increased, there will have to be a significant cut to the fire budget and current levels of service could not be maintained.  This is something on which I am not willing to compromise as the safety of residents must be paramount.

“I know of course that nobody wants to see an increase in tax of any kind, but I welcome your views on the potential council tax increase and encourage you to take part in this consultation to help maintain this integral emergency service.”

Cumbria Fire and Rescue Service’s Chief Fire Officer, John Beard, added: “We are grateful for the support we receive from the public and in order to maintain our emergency response and community safety services in Cumbria small increases in taxes are sometimes unavoidable.”

The survey is now open for those who wish to have their say.

The survey will close at 5pm on 6 February 2023 and paper copies of this survey can be obtained by ringing 01768 217734 or emailing commissioner@cumbria-pcc.gov.uk. 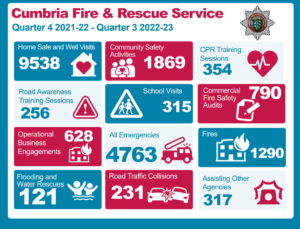