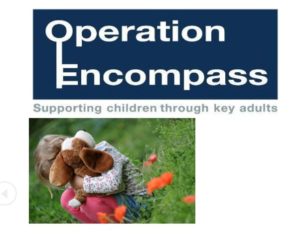 Operation Encompass Offered to All Cumbrian Schools After Successful Pilot

Cumbria’s Police and Crime Commissioner Peter McCall has funded the specialist project Operation Encompass, designed to provide early reporting to schools of any domestic abuse incidents that occur outside of school hours and might have an impact on a child attending school the following day.

Peter McCall comments: “Domestic abuse knows no bounds and it is essential to support those who experience it. Operation Encompass is a simple but effective protocol which ensures that partner agencies, schools, Children’s Services and the police all work together and have the relevant information quickly to protect vulnerable young people.”

The pilot scheme was launched last year in Cumbria, initially involving school in Workington and then extended across Allerdale. A representative from each school was trained as the ‘key adult’: the person who would receive the information and could act accordingly.

Following the successful pilot scheme all schools, children and their families involved commented that the project was beneficial to them, destigmatised the issue, encouraged engagement with the school and it identified the need at an earlier stage.

Elisabeth Carney-Haworth, founder of Operation Encompass comments: “Imagine arriving at school after hearing or witnessing domestic abuse – you have not slept, had no breakfast, don’t have all your school uniform and your home is in disarray. Now you are expected to sit in your classroom and learn. This is happening in our schools every day.”

The partnerships between Cumbria Police, Cumbria County Council, the local Children’s Safeguarding Hub and the schools will enable everyone to work towards providing early, efficient trauma-informed support.

According to the Home Office around one in five children in the UK have witnessed or been exposed to domestic abuse. This group of children are four times more likely to go on to experience or perpetrate domestic abuse later in life.

Analysis published by the Office of the Children’s Commissioner for England in August found that there are at least 420,000 children living in households with a “toxic trio” of domestic abuse, parental substance misuse and mental illness present.

Operation Encompass is a scheme in which schools are informed the next day or within 24 hours when a pupil has been involved in or exposed to an incident of Domestic Abuse so that the school can better understand the child’s situation and provide support as and when necessary.