Cumbria Police and Crime Commissioner, Peter McCall has welcomed the revised Victims Code, published by the Ministry of Justice earlier this year.  The PCC recently met with colleagues at Cumbria Victim Support to hear first-hand how the changes will affect victims in the county.

Speaking on the more accessible code, Peter McCall comments: “Over the last 5 years, one of my key priorities has been supporting victims of crime and this new streamlined Victims Code is much more user friendly and accessible.

“The code consists of 12 Victims Rights that have been set out clearly, are easier to understand and concisely describes what the victim can expect from the police, courts and criminal justice agencies.

“Most people would not know, or need to know, the process of what happens to you when you have been a victim of a crime.

“For example, I imagine the majority of people would not know about the procedure of going to court and being a witness, or the difference between a witness statement and a victim personal statement or even how decisions are reached in respect of whether cases actually go to court or not and their Right to Review.

“This newly revised Victims Code makes victims more aware of their rights and how they can be best supported in what is probably one of the most challenging times in their lives.

“I also work with Criminal Justice agencies to monitor how well they are meeting the rights in the code, identifying best practice and areas for improvement.”

Lee Evans, Operational Manager for Cumbria Victim Support comments: “At Victim Support we are pleased that the Victim’s Code has been streamlined and made more accessible for victims of crime. Crucially it supports putting victims first and provides a set of rights and standards that everyone can expect.

“A key part of the support and advocacy we provide is to ensure all victims are aware of their rights under the code to enable and empower them, and we work closely with partner agencies including the police and the OPCC to ensure that the standards are promoted and met.”

Sandra Wiggin, Cumbria’s Victims Advocate comments: “We are pleased to see that the Code of practice for victims of crime has been reviewed and the 12 Rights of victims are clearly set out.

“Hopefully, these Rights will be strengthened further with the introduction of a ‘Victims Law’ following government consultation in the summer.” 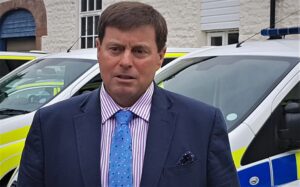