Cumbria’s Police and Crime Commissioner, Peter McCall welcomes the tougher sentencing and improved police powers to tackle the cruel practice of chasing hares with dogs and could see offenders jailed for up to six months and face unlimited fines.

Hare coursing – where dogs are used to chase, catch and kill brown hares is a real issue in some rural areas, and is also associated with a range of other criminal activities, including theft, criminal damage, violence and intimidation.

Talking about the new penalties for hare coursing Peter McCall comments: “These new plans to strengthen the powers and penalties that help to prevent such a barbaric practice of hare coursing, is another step towards making our rural communities safer.

“Although we do not have large numbers of cases of hare coursing in Cumbria, we do have some and one case is one too many.

“The persistent few who engage in illegal hare coursing often cause criminal damage, threatening violence and intimidation against farmers and landowners, and can be involved in other opportunistic rural crimes.  Their activities are illegal and will not be tolerated, I’m very pleased to see increased penalties showing that these crimes will be treated seriously.”

Cumbria Constabulary spokesperson comments: “We take all reports of wildlife crime and rural crime seriously and encourage the public to report such incidents as hare coursing or suspicious activity to us.

“You can submit a report online here – Report a Non-Emergency Crime/Incident Online – Cumbria Constabulary  or speak to an officer on 101. If a crime is in progress then please use 999.

“Alternatively, you can contact independent charity Crime Stoppers on 0800 555 111 to report information anonymously. 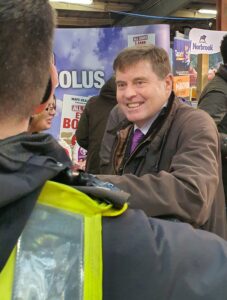