Cumbria’s Police and Crime Commissioner, Peter McCall, Cumbria Constabulary and the Soroptomists are supporting UK Anti-Slavery Day on the 18th October, highlighting their new initiative of producing a set of ‘starter bags’ to support victims of modern slavery in Cumbria, as supported by the Commissioner’s Property Fund.

Last year, there were 197 intelligence reports relevant to Cumbria about potential modern slavery and 6,993 potential victims, an increase of 36 per cent on the previous year, were referred into the UK’s National Referral Mechanism.

Modern Slavery is a hidden crime, which is taking place in our takeaways, car washes, nail bars and private homes within Cumbria. There is no typical victim of Slavery. They can be men, women and children of all ages and we need to raise awareness and promote the support services available to modern slavery victims across Cumbria.

Peter McCall comments: “The Soroptomists recently received funding from the Property Fund and the Rotary at Cockermouth to produce a set of ‘starter bags’ for victims of slavery and exploitation in Cumbria.

“These ‘new start’ bags contain items such as clean nightwear, new clothes, toiletries and come with a greeting card containing a message: “ We know you have suffered trauma and we want you to know, that although we will never meet, there are people in Cumbria who care about you and are thinking of you.

“We hope these bags, made available and stored with the help of Churches Together in Cumbria, will help Modern Slavery victims feels supported and reassure them that there are options available and support mechanisms in Cumbria for them to make a new start.”

Detective Chief Inspector Craig Smith, force lead on modern slavery for Cumbria Constabulary comments: “People may have the misconception that modern day slavery doesn’t happen in Cumbria – and that it is only an issue for big cities.

“But human trafficking and slavery can happen anywhere. I would urge anyone who has concerns to report them to the police immediately.

“We work hard to protect vulnerable people and stop any possible exploitation as quickly as possible, and to bring anyone found responsible for these horrific crimes to justice.”

DCI Smith added: “I would like to stress that anyone of any race or background could be a victim of modern day slavery.

“Offenders target people who are vulnerable and isolated – which can mean people who do not speak English or do not have friends or family in the country could be more easily preyed upon.

“We often rely on the public for valuable information and evidence when investigating these type of crimes.

“I would urge people to take the time to learn the signs and get in touch if you have any suspicions that something is not quite right.”

Signs that somebody could be a victim of modern slavery include:

Types of slavery could include sexual exploitation, forced labour and domestic slavery.

Please note that the next deadline date for Property Fund applicants is 30 November 2019 and for further details, guideline and guidance of how to apply see https://cumbria-pcc.gov.uk/what-we-do/funding/property-fund/ 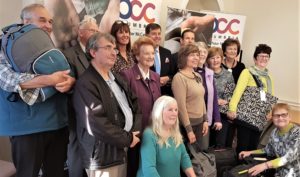