The new cameras in Phase 2 of CCTV come as a result of the Commissioner listening to feedback from local people and councils as well as the Constabulary.  The 24 proposed new cameras will be in towns such as Keswick, Ulverston, Wigton, Millom and Milnthorpe to name a few.  The additional 24 cameras will join Phase 1, which saw 56 cameras installed in 2015, to monitor the main towns in the county.

Police and Crime Commissioner, Peter McCall comments: “I am delighted to be working with the local councils to develop the next stage of CCTV.  I often talk about ‘we not they’ and this is clear evidence of local communities working with us for a really successful solution for our people.

“This is a significant step forward in tackling crime and anti-social behaviour.  Unfortunately, I can’t put a cop on every street corner but this investment is a massive progression and will go a long way to improve people’s confidence.   This investment comes at a time when we have increased police officer numbers by 45, as a result of increased council tax payments and are in the process of recruiting an additional 51 officers as part of the Government’s Operation Uplift initiative.  CCTV will be a great additional resource in the fight against crime and anti-social behaviour and will help to focus and target our officers on criminals and their activity.

“I would like to thank the town, parish and district councils for coming forward and partnering in this innovative approach that once again proves Cumbria is leading the way in using technology to keep us all safe.”

Assistant Chief Constable Andrew Slattery, Cumbria Constabulary, said: “The planned expansion of the county’s CCTV network is welcome news and is one of the many ways that we use to keep people in Cumbria safe.

“The existing suite of cameras have been in operation since 2015 and have made a real difference to policing.  The cameras have assisted officers to locate vulnerable missing people, as well as identify vehicles and individuals suspected to be involved in committing crime. CCTV footage provides officers with crucial evidence and provides key investigative opportunities.

“The Constabulary has worked with the Police and Crime Commissioner and local councils to identify those areas where investment in CCTV infrastructure will best serve to protect communities from crime and anti-social behaviour.

“This partnership work will enhance the existing system and is part of our drive to develop community policing, along with the recruitment of additional officers to work in neighbourhoods throughout the county.”

Cllr. Pete McSweeney, South Lakeland District Council member for the Arnside and Milnthorpe ward comments: “As a representative of local communities, I would like to thank the Police and Crime Commissioner and Cumbria Police for listening to our concerns and extending the CCTV coverage across Cumbria, especially to villages like Milnthorpe.

“Through a true partnership approach, the purchase, installation and ongoing support for these CCTV cameras is being jointly funded by the Police and Crime Commissioner, parish and town councils in South Lakeland and South Lakeland District Council.

“We hope that the presence of a CCTV camera in the Market Square will be a deterrent to those responsible for these activities.

“This a great example of how organisations and agencies can work together for the benefit of local communities.”

David Burn, Keswick Major comments: “Keswick is a safe place to live but we are not immune from anti-social behaviour and crimes such as shoplifting and the occasional assault. Police-monitored CCTV will give added reassurance to our community and will give the police the opportunity to respond while a crime is underway.

“The Town Council is extremely grateful to the Police and Crime Commissioner for the grant towards the cost of the cameras.”

Andy Jones, representative of the Penrith Industrial Estates Bid: “One of the main concerns raised by the stakeholders on the three industrial parks within the area, was that of safety and security.  We are delighted that our application for the two cameras has been successful.

“The location of these cameras will now not only deter any criminals thinking of coming into Penrith, but will also help to keep our estates a safe place for those who work in and visit the many fabulous businesses we have.

“We would like to take this opportunity as well, to thank both the Police and Eden District Council, for their advice and continued support in our quest to get CCTV cameras installed within the bid area.”

Inspector Mike Taylor, Eden Local Focus Team, said: “The Constabulary has worked with the Police and Crime Commissioner and local authorities to identify those areas where investment in CCTV infrastructure will best serve to protect communities from crime and anti-social behaviour.

“We are pleased to see more cameras introduced in the Penrith area and I am sure that they will be effective in protecting local people and businesses.

“This partnership work will enhance the existing system and is part of our drive to develop community policing, along with the recruitment of additional officers to work in neighbourhoods throughout the county.”

CCTV spotted a male on Millennium Bridge in Carlisle. Their attention was drawn to him due to his body language and the fact that he was loitering on the bridge staring down at the traffic. The police were concerned so when he moved off the bridge, they continued to track his movements back to a vehicle and obtained a registration number. At this point there were no reports about the male. Ten minutes later, the police received a call that the male was suicidal and looking to kill himself. The police used the male’s description, registration number and last location seen captured by CCTV, and a short time later, the male was taken into safety.

When a fight broke out at a public event, one individual was armed with a knuckle-duster. The volume of pedestrians in the street meant that police vehicles were unable to reach the scene. CCTV monitored the fight, tracked the perpetrators as they moved away, which informed officers of their location and resulted in an arrest.

CCTV spotted two males displaying challenging and aggressive body language, when monitoring the public as they left the nightclubs in the early hours of the morning. The police who were already present at the scene, were informed and consequently able to arrest a male who had launched a vicious attack, before he ran away from the scene.

This is the list of the councils that have applied and been granted funding although individual councils may still need to undertake some individual procedures/processes before they are in a position to accept the grant funding.

The Commissioner will be providing one-off grants per camera up to £3,000. 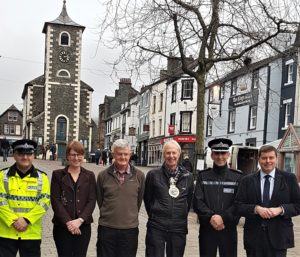