Those who lost their lives or have been injured in a roads accident will be remembered throughout August for National Road Victims Month. The UK-wide campaign aims to raise awareness around safer driving and educate the public on the possible and permanent consequences of dangerous driving.

In the past 12 months 26 people have been killed and a further 1,507 were injured on Cumbrian roads due to dangerous driving. Although this number has dropped from previous years, this high number has led Cumbria Constabulary and the Office of the Police and Crime Commissioner to focus on several themed campaigns around road safety.

The aim of these campaigns is to prevent dangerous driving and educate all drivers living and passing through Cumbria how to be a safer driver and the possible consequences faced if caught breaking the law.

Peter McCall, Cumbria’s Police and Crime Commissioner, said: “Anti-social driving is one of the most common complaints raised to me by Cumbrian residents – it blights the lives of residents and more importantly is inconsiderate and dangerous.

“Too many people across the county lose their lives to the fatal four: drink and drugs; speeding; not wearing a seatbelt; and mobile phone use.  The police will and do take these very seriously.

“When someone drives dangerously, whether it be under the influence or not giving the road their full attention, they not only put their own lives at risk but other innocent road users as well.

“I’m sure we all want to see a reduction in road incidents and especially fatal accidents throughout Cumbria, this is why we have police out on the streets in marked and unmarked vehicles, checking speed and dealing with reckless driving.

“The message is clear: for your own safety and that of other road users, please drive safely or face the consequences of your actions.” 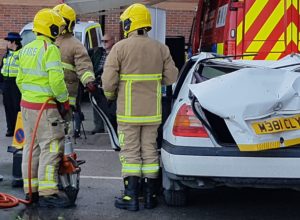