Project to help tackle drugs trafficking in Barrow a success

The programme identifies vulnerable people who are most at risk of being approached by drug gangs, supports them to move away from potential criminal behaviour and make positive life decisions. 1CLIC encourages long lasting behavioural change and supports the recovery of those who are already using drugs.

County lines is a form of criminal activity in which crime gangs use young and/or vulnerable people to carry, store or sell drugs in towns and rural areas.

1CLIC, funded by Cumbria’s Police and Crime Commissioner, Peter McCall, sees Cumbria Constabulary working in partnership with The Well Communities, an organisation that supports those who are recovering from addiction through counselling, peer mentoring, social activities, and other practical services such as housing and employment support.

Since the pilot launched in February 2022, 1CLIC have identified 68 people at risk of being criminalised by organised crime gangs for county lines and 5000 visits have been conducted to people at risk. Every person identified has been supported and are now on a positive path. There has been a 50% reduction in consequential crime and demand on response policing in relation to drugs.

Cumbria’s Police and Crime Commissioner, Peter McCall, said: “The 1CLIC programme is a fantastic pilot that cuts off the drugs path into Cumbria. If we can identify those who are vulnerable to being targeted by criminals and provide them with access to a more positive lifestyle, we can help cut off the drugs supply into Cumbria and into our communities.

“The programme is partnership and community lead to help spot potential victims and provide them with support to create a better life before organised crime gangs get the chance to exploit them.

“We have worked with The Well in the past and they have done some really incredible work around supporting addiction recovery and preventing re-offending around drug-related crime, so I am thrilled that they are leading 1CLIC for Barrow and working with a dedicated Police Sergeant, Kevin Milby.

“The project has achieved so much in its first five months, I look forward to seeing it progress and grow over the next 19 months.”

“A whole system approach is adopted to cast an awareness blanket across the area – it is both unique and innovative.

“The Well Communities CIC & Cumbria Constabulary are committed to supporting some of South Cumbria’s most marginalised individuals via this workstream.

“Community awareness will assist in identifying both perpetrators and victims of County Lines activity which will contribute to making our towns safer places to live.”

“The county has an outstanding record of disruption and convicting crime groups operating in our area, whilst working with partners to safeguard the most vulnerable people who could be targeted.

You can report non-emergency issues online at www.cumbria.police.uk/reportit You can also phone on 101. 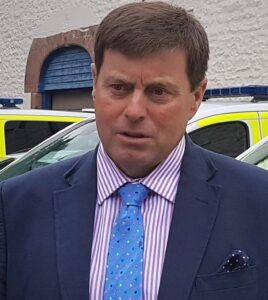