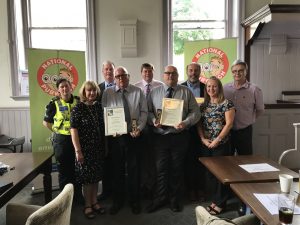 As part of National Licensing week (19-23 June), three Cumbrian Licensees received a ‘Star Award’  from Cumbria’s Police and Crime Commissioner, Peter McCall at an event hosted by JD Wetherspoon at the Chief Justice of the Common Pleas in Keswick on Tuesday 20 June.

The Star Awards were presented to:

The ‘Star Awards’, launched by National Pubwatch, highlight the important work being carried out by the many people who have played a significant role in the success of their local Pubwatch schemes.

Police and Crime Commissioner Peter McCall said: “I was delighted to present Dave, Mike and Gary with their Star Awards, and to be able to recognise their exceptional contribution.  I’ve always said that we need to work together to tackle crime and antisocial behaviour, and the Pubwatch Scheme is a great example of a voluntary, community based crime prevention scheme, which is helping to keep Cumbria a safe place.

Joe Murray QPM, National Pubwatch said: “ Pubwatch Schemes have proved to be a valuable asset when dealing with violence and antisocial behaviour linked to the night time economy. With a reduction of policing resources, there is a greater expectation that licensees take more responsibility for dealing with such issues on licensed premises. In Cumbria and elsewhere, the effectiveness of Pubwatch Schemes is all to apparent with the prospect of people who misbehave being threatened with being banned from all pubs and clubs. These awards today reflect the hard work and commitment that Dave MacKenzie, Mike Vose and Gary Quigley have given to their Pubwatch Schemes and as such created a safer environment for people to socialise.”

Also attending was Lisa Elder, Pubwatch Coordinator in West Cumbria who earlier this year received the ‘Malcolm Eidmans’ Award at the National Pubwatch Conference in Reading. This award was in recognition of her outstanding contribution in supporting the work of Pubwatch in West Cumbria.