Spotting the signs of modern slavery

Cumbria’s Police and Crime Commissioner, Peter McCall, is urging the public to learn to spot the signs of modern slavery and report anything suspicious to the Police.

Modern slavery is the exploitation of vulnerable people who are used for personal or commercial gain. Victims of Modern slavery are often the subject of human trafficking and exploitation and can be forced into sex work, marriage and domestic servitude.

Some victims may be forced to work long hours in car washes, factories or out in agricultural settings, and some can be criminally exploited in cannabis farms and through county lines.

Signs that someone may be a victim of Modern Slavery include:

Illegal brothels force victims into sex work. Signs of an illegal brothel may be a continuous flow of different people entering/exiting a property, different cars being parked outside the property and along the street, and those who live in the house rarely leaving.

Cumbria’s Police and Crime Commissioner, Peter McCall, said: “Modern Slavery is an ongoing atrocity that is still happening in modern day society in Cumbria and across the UK.

“Those who are imprisoned in modern slavery are forced to work in unsafe conditions with little to no pay and being pushed to their physical limit. Some are sold into prostitution, domestic work or forced into a marriage, including child marriage.

“It truly is an horrific ordeal which is why it is so important that we all know how to spot the signs to help these vulnerable and abused victims escape from exploitation.

“I would urge anyone who sees anything suspicious, and you suspect to be a victim of human trafficking or modern slavery please report your suspicions to the Police on 101 or 999 in an emergency or report it anonymously to the Modern Slavery Hotline on 08000 121 700.”

Detective Chief Inspector Andrew Donnelly is Cumbria Constabulary’s force lead for modern slavery. He said: “People may in the past have thought cases such as this don’t happen in somewhere like Cumbria – but we have real examples which demonstrate this is an issue for this county as well as the rest of the UK.

“Both police and our partners have carried out significant work across Cumbria to raise public awareness of these crimes.

“We work hard to protect vulnerable people, stop any possible exploitation as quickly as possible and to bring anyone found responsible for these crimes to justice.

“One of our key priorities is to safeguard those victims of these offences and the public can have a part to play in helping us protect these people.

“Many of these cases are identified through the vigilance of the public and our partners as they become more aware and attuned to identifying victims and offenders alike.

“So, as always, we would urge anyone with information or any concerns to contact us as soon as possible.” 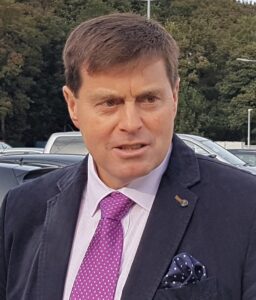