Cumbria’s Police and Crime Commissioner, Peter McCall, Soroptimists and the Churches Together distribute more ‘starter bags’ to support victims of modern slavery in Cumbria, as supported by the Commissioner’s Property Fund.

Last year, there were 197 intelligence reports relevant to Cumbria about potential modern slavery and 6,993 potential victims, an increase of 36 per cent on the previous year, were referred into the UK’s National Referral Mechanism.

Anyone of any race or background could be a victim of modern day slavery. Offenders target people who are vulnerable and isolated – which can mean people who do not speak English or do not have friends or family in the country are often at greater risk.

Peter McCall comments: “Just last month, starter bags were given to potential victims of modern slavery, in Cumbria. Their reactions were really positive to receiving the bags and helped to develop a greater trust between the Police and the victim.”

“This new initiative provides ‘starter bags’ that contain items such as clean nightwear, new clothes, toiletries and come with a greeting card containing a message: “ We know you have suffered trauma and we want you to know, that although we will never meet, there are people in Cumbria who care about you and are thinking of you.

“The bags, made available and stored with the help of Churches Together in Cumbria, will help Modern Slavery victims feels supported and reassure them that there are options available and support mechanisms in Cumbria for them to make a new start.”

The Safer Cumbria Modern Slavery Coordinator Sandra Radcliffe and the Soroptimists have collaborated together to produce these bags to help create a better relationship between the victim and the Police when they safeguard them.

Jane Inman, Programme Action Lead, Cockermouth Soroptimists comments: “I think it’s great that we are able to present these additional starter bags and work together to help eradicate modern slavery in Cumbria.

“Today’s presentation, from Cockermouth, Penrith and Carlisle Soroptimists, of additional ‘starter bags’ is a clear sign that this initiative is working well, has already come to good use and that victims know that here in the county, there are people that care and want to help.”

Detective Chief Inspector Craig Smith, force lead on modern slavery for Cumbria Constabulary comments: “People may have the misconception that modern day slavery doesn’t happen in Cumbria – and that it is only an issue for big cities.

“But human trafficking and slavery can happen anywhere. I would urge anyone who has concerns to report them to the police immediately.

“We often rely on the public for valuable information and evidence when investigating these type of crimes.

“I would urge people to take the time to learn the signs and get in touch if you have any suspicions that something is not quite right.”

Signs that somebody could be a victim of modern slavery include:

Types of slavery could include sexual exploitation, forced labour and domestic slavery. 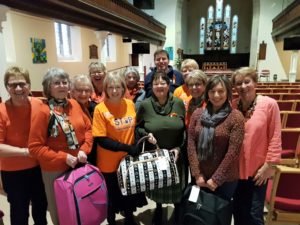