The National Rural Crime Network published its first report in the study of domestic abuse in rural areas. The report focuses on the threat to and lack of support for victims of abuse within rural populations.

The aims of the report were to discover and explain how domestic abuse in rural areas manifests, progresses, ends and how it differs from abuse in urban settings. The research began in 2017 as Police and Crime Commissioners who were members of the National Rural Crime Network were concerned over the feedback they were receiving from rural victims. Previously there was little to no information around the subject, with most research being done around domestic abuse in cities and highly populated areas. Cumbria is part of the National Rural Crime Network.

Peter McCall, Cumbria’s Police and Crime Commissioner, said: “Domestic abuse in rural areas is clearly a major issue, whilst ours was not one of the counties looked at by this research, it would be naïve to think it does not affect us, it does!

“Domestic Abuse is a problem but we should be really clear, it is a societal problem and the police are only a part of the solution, we all have a role to play in dealing with this issue.

“Cumbria is of course a rural county and many of the issues raised by the report concerning access to support apply here as does the need to improve support to domestic abuse victims and bringing abusers to justice.

“Domestic abuse isn’t just physical – it can be emotional, psychological and even financial.

“Domestic abuse victims also tend to get stuck in a repetitive pattern of behaviour so we need to help victims to break this cycle of abuse.

“The message is very clear – you don’t need to suffer in silence or be alone, please report, you will be believed and you will be supported.

“In Cumbria there have been 7,956 reports of domestic abuse were reported to the Constabulary from March 2018 to March 2019, so we know that this type of crime is happening in our towns, on our streets and in isolated communities.

“I have commissioned Victim Support in Cumbria to provide practical help, even where victims do not want to report abuse to the police.

“I’ve met several survivors through Victim Support and their stories are very powerful, inspiring and heart rending – we must continue to improve support to them.  Most of all I want to reassure anyone suffering abuse of any form that the police and other agencies are ready to help and you will be taken seriously, please report any abuse.”

Trained Victim Support workers offer emotional support and practical help with areas like housing, benefits and how to keep themselves safe. This can be face-to-face or over the phone. They can also act as an advocate for the victim with other agencies. People affected do not have to involve the police to access this support but the service can help a victim to understand the criminal process and take the first steps to involving the police if they wish to. Victims who don’t feel comfortable speaking over the phone can message a member of Victim Support using ‘Live Chat’ on the Victim Support Cumbria webpage.

Diana Fawcett, Chief Officer at independent charity Victim Support, said: “We know from working with victims and survivors of domestic abuse that they already face significant barriers in reporting to the police and accessing support and this report highlights the additional difficulties faced by those in rural areas.

“Domestic abuse is still significantly underreported and to learn that victims in rural areas are half as likely to report it is shocking.

“It’s important that victims know there is support available to them, whether or not they choose to report to the police.

“As a member of the Rural Crime Network we are committed to addressing the issues around difficulty in accessing support in these areas to ensure that victims of domestic abuse get the support they need and deserve, regardless of where they live.

“We also work closely with all partner organisations across the rural areas we serve to ensure the best possible support for everyone who needs it.”

If you are in an abusive relationship or believe someone you know is a victim please contact the police on 101 or 999 if in immediate danger. Victim Support can be contacted on 0300 303 0157. 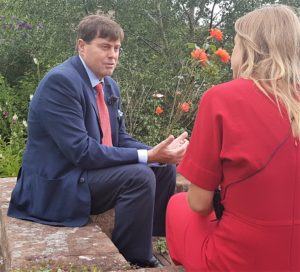