Workshop Teaches School Pupils that all Actions Have Consequences

Schools across Cumbria are taking part in whole-day workshops to learn all about the consequences of crime. The workshops titled ‘Actions Have Consequences’ detail a variety of crimes ranging from knife crime to anti-social behaviour and the negative outcomes. The events are being rolled out across Cumbria after being highly successful in Egremont in the West of the county.

The aim of the workshop is to deliver the message of the title in a fun and engaging manner as well as deterring the younger generation from getting involved in any type of criminality as they will face the consequences and start their lives off on a negative path.  The topics covered throughout the day are presented with real life stories from young people, parents and police.

Peter McCall, Cumbria’s Police and Crime Commissioner, attended the workshop at Kirkby Stephen Grammar School: “It’s a fantastic workshop and it really drives home the message that all of our actions do have consequences.

“The focus on knife crime is incredibly topical as we have all seen the rising trend of teenagers across the UK carrying knives.

“Crime is something that is glamourised across some media and, with a promise of money, cars and other materialistic goods, it’s easy to see why so many young people are attracted to this type of lifestyle.

“Due to this false promotion, it’s imperative that we get in to our schools and show these young people that that isn’t the real outcome and that the reality of getting involved is much more negative and it’s the wrong path to walk down.

“I fully believe that education and prevention is the key to a better future for everyone not only in Cumbria but across the whole country.”

Paul McGovern M.B.E from HMP Manchester, who led the workshop, said: “It’s nice that Cumbria police are putting so much effort in to educating today’s pupils for a better tomorrow and also that Mr McCall is giving his time in supporting the event.”

“The actions have consequences presentation was hard hitting and informed students of the consequences of crime not only on themselves but upon victims and the families of victims.

“The workshop also educated students about how to deal with some of threatening situations the may find themselves including county lines, drugs, gangs, stop and search, and knife crime.

“I very impressed with all the police officers involved and Paul McGovern from Strangeways prison and many students said how they had enjoyed the workshop.” 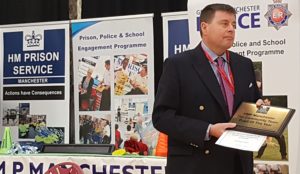