The Youth Commission have been consulting with people aged 14-25 years across Cumbria, asking their views on what they believe to be the key priority topics for the police to consider when supporting young people, called the ‘Big Conversation’. Their aim is to enable young people to express their ideas and inform decisions about policing and crime prevention in Cumbria.

Cumbria’s Police and Crime Commissioner, Peter McCall comments: “When I was elected in 2016, I promised that I would give everyone in Cumbria ‘a voice’ and the Youth Commission’s ‘Big Conversation’ has produced some powerful and hard-hitting opinions about local communities, the police and public safety of young people in the county.

“I am delighted that they also targeted difficult to reach groups, for example gathering views from young people living in isolated areas of Cumbria, young people who are carers and young past offenders in their findings.

“Some of the open and honest comments captured included young people witnessing unhealthy relationships within the family home and how this affected their mental health, long waiting times for an initial appointment to access mental health support and how in some areas across Cumbria, drugs and alcohol are extremely accessible, even from a very young age.

“It’s important that the views of young folk are heard but vital that we act on their findings and recommendations. I will certainly be using their views, opinions and suggestions to help shape the countywide agenda on supporting victims, reducing crime and protecting the vulnerable in the county.

“I am grateful that Leaders Unlocked gave me the opportunity to show my leadership skills and I have met so many amazing and talented young people who are passionate about making a difference in Cumbria.

“My focus has been to give young people across Cumbria a voice and the most important and rewarding part of working with the youth commission is that their views were always at the heart of the project.

“Creating future leaders in our communities and connecting with harder to reach groups has meant so much to everyone involved. It’s important to give young people a voice and to include them in the decision-making process. I’m passionate to continue with this work and incredibly proud of the work of each of the Youth Commission members. I hope they have enjoyed it as much as I have.”

Chief Constable Michelle Skeer, Cumbria Constabulary, said: “A core role for policing is to listen to, understand and work with the communities we serve. This includes people of all ages.

“I am looking forward to hearing the presentations from some of the Cumbria Youth Commission members. I am also keen for us, as a police force, to use some of this information to improve the quality of life for young people across our county.

“In Cumbria, we have strong links and working relationships with the county’s education service and youth groups, and I hope that we can build on this to make a real difference for young people.” 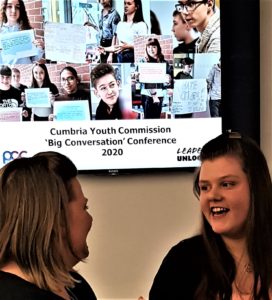