The future for OPCC youth engagement and supporting young people in Cumbria is by working in partnerships with key stakeholders, to co-commission projects that set the vision and direction of the PCC’s priorities in the Police and Crime Plan 2021-2025.

For example, the Partnerships and  Commissioning team are currently in the early stage of developing a youth commissioning strategy and are looking at:

The OPCC open grant schemes, such as the Property Fund, focus on aspects of the Police and Crime Plan priorities by supporting young people. The fund invites local clubs and groups that organise youth activities to apply for grants of up to £2,500. In particular those that provide positive diversionary opportunities for young people, and also help to prevent young people at risk of exploitation or offending from being drawn into committing crime and antisocial behaviour. Some examples of funds awarded CADAS self-harming workshops in FE colleges, EYP Community Alcohol Partnership in Egremont, Solway network, Carlisle Youth Zone and Barrow Drop Zone. Click here for more information on the latest round of application deadlines for the Property Fund.

Throughout the year, the OPCC organise a variety of youth engagement opportunities that provide young people with a voice on policing matters, for example: around the table events with colleges, youth zones, businesses, youth panels as well as attending larger county events such as pride events and county shows. Information found at News and Events section of the website

From 1st April 2019, Leaders Unlocked continued to develop the work with the Youth Commission.

During 2019-2020, the Cumbria Youth Commission have continued to consult with people aged 14-25 years across Cumbria, asking their views on what they believe to be the key priority topics for the police to consider when supporting young people, called the ‘Big Conversation’. Their aim has been to enable young people to express their ideas and inform decisions about policing and crime prevention in Cumbria.

Cumbria’s Police and Crime Commissioner, Peter McCall comments: “When I was elected in 2016, I promised that I would give everyone in Cumbria ‘a voice’ and the Youth Commission’s ‘Big Conversation’ has produced some powerful and hard-hitting opinions about local communities, the police and public safety of young people in the county.

“I am delighted that they also targeted difficult to reach groups, for example gathering views from young people living in isolated areas of Cumbria, young people who are carers and young past offenders in their findings.

“Some of the open and honest comments captured included young people witnessing unhealthy relationships within the family home and how this affected their mental health, long waiting times for an initial appointment to access mental health support and how in some areas across Cumbria, drugs and alcohol are extremely accessible, even from a very young age.

“It’s important that the views of young folk are heard but vital that we act on their findings and recommendations. I will certainly be using their views, opinions and suggestions to help shape the countywide agenda on supporting victims, reducing crime and protecting the vulnerable in the county.”

After the ‘Big Conversation’ conference in February 2020 and the start of the Covid-19 pandemic, the PCC elections were postponed until 2021.

As with so many things, youth engagement has adapted and some examples during the Covid-19 pandemic are included below: 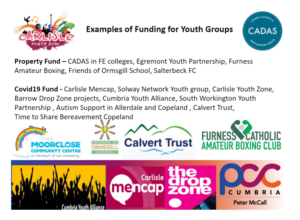 We continue to look at the recommendations provided as part of the ‘Big Conversation’ and how these findings overlap and compliment that of the Constabulary’s Child Centered Policing team, the Community Support Officers and Citizens in Policing.